Regular readers will know that I am avoiding the Olympics. I am staging my own personal protest by boycotting the coverage and taking absolutely no notice of events, or the medal tally. But I’m also looking at non-sport coverage because that’s where the real meaning of the Games is exposed.

Take for example the gushingly OTT coverage of the eating habits of American super-freak swimmer Michael Phelps. Phelps’ intake of 12,000 calories for breakfast each day has been treated as a wonder of science, or as in one of my local papers something to mock and make fun of.

It’s actually my number one Olympic Obscenity of the week. It beats out the 56 fake ethnic groups, bus crashes and repeated screenings of a weighlifter’s busted limbs by a long way. The only thing that comes a close second is the anorexic arrested development of the female gymnasts.

Phelps’ diet would feed the entire Russian female gymnastics team for a week and let’s not (yet) even mention the apocryphal starving children in Africa.

According to media reports, this is Michael Phelps’ daily intake of food:

This is about six times the daily average adult calorie intake in a country like Bangladesh where the average daily intake of protein is less than 70 grams.

Poverty continues to be widespread in Bangladesh, with more than 50 per cent of the population estimated to be living below the poverty line. Its people have a life expectancy of 58 years. Mortality rate of the children under 5 in Bangladesh is one of the highest in the world. About 60 percent of the children experience moderate to severe malnutrition and the people in general suffer from endemic health problems. Approximately 53 percent of the population is illiterate.

Bangladesh is typical of many countries in the developing world (though that’s a mystifying term too), as the following table from the Center for World Food Studies shows. 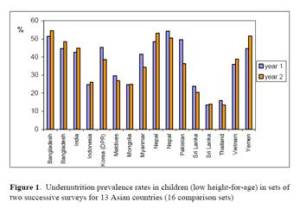 This table is for a series of Asian nations, in many under nutrition in in children is over 50 per cent. A similar table for African countries shows rates as high as 70 per cent in some areas.

Yet Michael Phelps scoffs down all that stuff and most of it is from the typical carb and fat-heavy diet that makes so many North Americans grossly obese.

In countries like the USA the personal daily expenditure on food is quite low (about nine per cent), while incomes are relatively high. In a nation like Tanzania, it’s the exact opposite; low incomes mean that expenditure on daily food intake is around 70 per cent of the total.

And finally, Sierra Leone, one of the poorest nations on earth and almost totally dependent on imported food. I bet they’d love some of Phelps’ pancakes in Freetown:

Sierra Leone remains extremely vulnerable to global commodity price changes. The FAO has listed Sierra Leone as one of 8 most vulnerable countries globally in the current food prices crisis.Roughly 66 percent of the population lives below the poverty line set for the 2003/04 household survey. Twenty one percent of the population in 2003/04 was unable to meet minimum daily caloric requirements .

The average household spends 52 percent of its income on food, a third of that on rice, which, as the main staple food, accounts for roughly one third of the caloric intake of the poorest quintile of the population. Up to a quarter of the population now lives in the Freetown area, away from major production areas and dependent on imported food. Roughly one third of national consumption is sourced though imports and food aid.

Another obscene spectacle in the water cube

The other obscenity of the week that highlights the real Olympic story, though you won’t read it this way in the mainstream media, is the 12 year-old girl from Cameroon who trains in an 18 metre pool. Antoinette Guedia’s story is being written as a starry-eyed tribute and demonstration that the Olympics is about plucky little champions from the backblocks:

“I started swimming because my dad thought it would be a nice hobby. The competitions were a big surprise,” said Guedia.

Some critics disagree with putting children in high-pressure adult sports contests, but Guedia, in flip-flops, red T-shirt and cropped green jeans, is more relaxed than older swimmers stressing about how to gain a hundredth-of-a-second advantage.

She listens to hip-hop to calm her nerves and takes a childlike delight in loading her tray with US junk food in the village canteen. She’s also day-dreams about the future.

Cameroon’s capital Yaounde plans to build an Olympic pool, but that’s still a taxi ride of several hours for Guedia.

The reality is of course that poor young Antoinette is just another sideshow freak to entertain the crowds; what real chance does she have up against the professional athletes from wealthy nations. It all just adds to the illusion that Beijing has become.

The other grotesque illusion of these games is the sight of the young women competing in the gymnastics. The gold medal winner, American Nastia Liukin is 18, but she looks at least four to five years younger. Some of the other competitors who are in their mid to late teens look about 10 or 11. In fact the rules mean that all the gymnasts are supposed to at least have their 16th birthday in the year of competition. And it seems that the Chinese were not even satisfied with that; according to some media reports, they have had girls as young as 13 competing in the team that won the overall gold medal [Salon].

Anne Killion of the Silicone Valley Mercury News, sums it up nicely:

This story has all the components for a perfect Olympic storm:

There’s actually quite a history of young female gymnasts suffering from eating disorders, and at least one or two deaths in the past 20 years [see here]. This is at the other end of the scale from Michael Phelps, but it’s another food-related aspect of the Olymics freak show.

This entry was posted on Sunday, August 17th, 2008 at 11:01 am and is filed under Beijing olympics, boycott China, China, propaganda, sport news. You can follow any responses to this entry through the RSS 2.0 feed. You can leave a response, or trackback from your own site.