Ah, that delightful little sprite the Fuck-Up Fairy (FUF) has been dancing on the broad shoulders of disgraced TV sock puppet Paul Henry for sometime. The shit was bound to hit the fan one day and that day was Monday.

Until then the gormless and goonish Henry has been protected by some lucky charm and the dismissive comment that ‘he’s just like that’.

Well, yes. He is like that. He’s like a rotten, racist, foul-mouthed, trumped-up, bigoted, insensitive, right-wing dribblejaws with a modicum of intelligence, but not enough to help him keep his maw shut.

His comments about the Governor General not looking or sounding like a Kiwi are racist, particularly given that Anand Satyanand was born in Grey fckuing Lynn.

Sir Anand, in Delhi for the Commonwealth Games, said he had not received a personal apology.

“I haven’t seen his apology. I’ve seen news reports that he has [apologised]. If he has, that’s fine.”

He said when he heard of the comments he only had one reaction.

“I am a New Zealand-born New Zealander. I am reliably informed I was born in 37 Dryden Street, Grey Lynn at the Bethany.

“That’s all I need to add to the chemistry.”

But let’s be clear, the comments would be racist in any context and it’s good to see the strong reaction against Henry this week. Even TVNZ has reacted and thrown Henry’s sorry ass into the can for a couple of weeks. But only, it seems after first attempting to smooth the row over with another ‘that’s Paul!’  comment:

TVNZ is also facing criticism over an initial statement in which spokeswoman Andi Brotherston defended Henry, saying he often said what “we quietly think but are scared to say out loud”.

Oh, so it’s OK to be quietly racist at TVNZ, just don’t get caught. So if you talk in code, rather than overtly bigoted tones, you can get away with it and send dog whistle messages to ACT party supporters in the vain hope that the government won’t cut the budgets even more.

Herald media commentator John Drinnan goes down this track, suggesting that TVNZ won’t be financially harmed by the outrage. He even argues that Henry’s stupid remarks were “orchestrated”:

Don’t attack Paul Henry for his latest orchestrated outrage – questioning whether Anand Satyanand has been “New Zealand enough” to be Governor-General.

The real question is about Television New Zealand and its cynical use of racial comments to boost publicity and profits.

Dirnnan may be right about this, but it does seem that TVNZ had to be pushed in order for them to agrees to (reluctantly) shove Henry off the Breakfast set for a couple of weeks. This statement from CEO Rick Ellis shows just how reluctant TVNZ was to give Henry the boot:

“Paul is one of New Zealand’s best broadcasters. He is a provocative host who speaks his mind and that is what many New Zealanders like about him. He often pushes the boundaries and that’s important in a country that values freedom of speech. But I consider his latest remarks to have well and truly crossed that line.

I would characterise Henry as a provocative host who shits all over people without a care in the world and that’s what many New Zealanders don’t like about him. At the moment the nation is evenly divided three ways in relation to Henry, but two-thirds don’t like his most recent outburst according to this Herald poll. 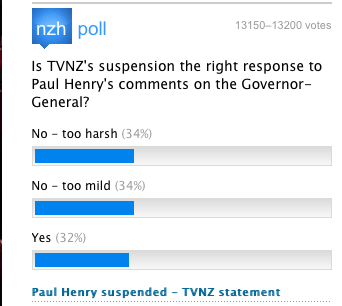 I’d like to see a similar poll about how PM John Key’s handled this mess too. It’s not always easy to publicly stand up to racists, but Key should have said something to Henry instead of trying to laugh it off. That just legitimises the racism. The real shame here is with John Key, but hey, that’s John for you!

And Paul, put a sock in that filthy mouth of yours. You hand out the bruisings, but don’t like it when you’re the subject of the hounding. Get over it. Your comments that you’ll “sue the paper” for taking shots of your house and your neighbours’ houses shows just how little you really know about media law.

“Get off my f*****g land,” he shouted. “Have you got your pictures now? Have you taken photos of my property or any of my neighbours’ properties? If any photos are published I’ll sue the f*****g paper.”

When he was not given a response, he yelled: “Can you not speak, you there in the car? I will f*****g sue your paper.”

Here’s my tip: Paul, spend your gardening leave with a shrink and a law book. You will need the next couple of weeks to prepare a defence for the inevitable Broadcasting Standards Authority complaint hearing.

The big elephant in the parlour here is just how bigoted is New Zealand. A recent example that caught my eye was the interview last week on Campbell Live with the guy who’s running the keep New Zealand farms in New Zealand campaign. I was too busy at the time to write it up, but some of the same sentiments about White=Kiwi were in evidence there too, with just a smudge of mum’s homemade jam to sweeten the bitter bun.

We should come back to this question of racism in the national identity of New Zealand at a future date.

This entry was posted on Wednesday, October 6th, 2010 at 9:21 am and is filed under backlash, media ethics, New Zealand Media, racial vilification, television. You can follow any responses to this entry through the RSS 2.0 feed. You can leave a response, or trackback from your own site.