Oh Henry #4: He’s not a ‘legend’ and it’s not about freedom of speech

There are two or three types of ‘defence’ that supporters of Paul Henry are using to deflect criticism, or to argue that he’s not racist, just misunderstood.

None of them are really robust, but I’m sure that we’ll see more of it over the next few days as his future hangs in the balance.

At least today TVNZ boss Rick Ellis has signalled that Henry’s future – and indeed, his return to the Breakfast gig – is still far from certain.

“I think that as the week has progressed and the complaints have continued to roll into the company, you’ve really got to reassess things each day and I’ll be reflecting over the weekend and again on Monday as to where we go from here.”

Whatever Ellis might decide in the next few days, Henry’s defenders will try to make the following arguments:

I don’t think the first two really stand up and they’ve both been analysed and discredited over the past week by many commentators. The ‘joke’ defence doesn’t stand up when you realise that Henry is a serial offender as I pointed out in ‘Oh Henry’ parts #1, #2 and #3. Henry may be a ‘nice guy’, but his image has taken a battering and his nasty streak is on display in concentrated form this week as everyone’s joined the dots.

[Note to new readers, or those stumbling on this at some distant future date – the background to all of this is contained in my earlier posts (linked above)]

And there’s no freedom of speech issue here either. Hate speech and blatant racism are not protected by any reasonable notion of free speech. That’s why these comments from Murray McCully are totally fatuous (I think that means ‘fart-like’):

Mr McCully this morning issued a statement saying he would also indicate to the Indian Government that Henry’s comments were the actions of one person.

He said freedom of speech was important in New Zealand.

“However it is always regrettable when a prominent individual abuses the freedom of expression, which is one of our basic rights, to cause offence to others.

“That is especially the case when the person offended against is a prominent public figure in another country.

[Henry’s remarks the actions of one person – McCully]

Were they really the actions of one person? Herald columnist Paul Thomas doesn’t find Henry amusing either and his comments about Ellis appearing to defend Henry on free speech grounds are spot on:

Henry’s stuff doesn’t crack me up.

Nor do I get what TVNZ chief executive Rick Ellis is on about when he says Henry “pushes the boundaries and that’s important in a country that values freedom of speech”.

Does Henry engage in cutting satire at the expense of the rich and powerful? Does he champion unpopular causes? Does he challenge middle-class New Zealand’s complacent assumptions? Is he a subversive figure like the American comedian Lenny Bruce who suffered police harassment and blacklisting?

Henry’s such an anti-establishment gadfly that he has a weekly audience with the Prime Minister which is apparently a laugh a minute.

[Penny drops for Henry and his employer]

Yeah, Henry’s apologetics for John Key are awful and now, thankfully, they may be over and Key won’t get a free spot to talk up his lame-arse government at our expense.

There’s a number of issues here that have been highlighted by two comments on my post #3. In particular, how complicit is TVNZ management in Henry’s juvenile posturing and insulting banter?

One of my postgrad journalism students, Josh Gale, points out that Henry’s co-hosts don’t call him out, particularly on the infantile “dick shit” episode:

While I agree with you that in the Dixit video one of his colleagues is trying to correct him, the woman sitting next to him has a big fat grin on her face the whole time. This seems to be quite common. All of his co-hosts sit there and giggle at Paul’s ignorant comments, maybe, but only maybe, saying “oh Paul, you’re being silly” in the usual vacuous manner, but not showing any spine whatsoever. The money must be really really good to sit there like a coward and not say anything.

And media commentator John Drinnan also picked up on this point in his comments:

Josh makes a good point. I’ve also been surprised by TVNZ’s willingness to associate key journalists with untarnished reputation – like Peter Williams, Pippa Wetzell and Alison Mau [with Henry]. Why would you ask key editorial presenters -with reputations to protect- to laugh along at those sort of comments.

So really there are some good questions brewing that I think TVNZ news management now has to answer:

I’m sure I’ll think of more over the next couple of days and feel free to add yours in the comments, but this last question is particularly interesting given the sort of positive response Henry’s actions have got from his loyal fans: 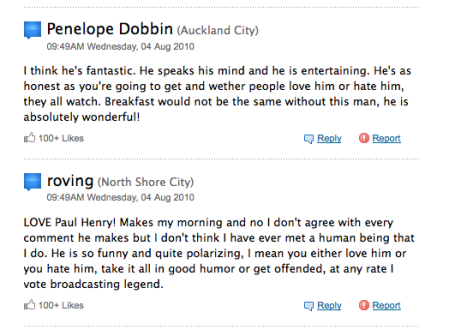 Government squirms …and so it should

It is great that John Key is still being criticised for his lame response to Henry – he laughed along with the joke – and the government is wriggling on a nasty hook at the moment.

Foreign Minister Murray McCully is also flapping and yapping in a vain attempt to hose down the growing international disquiet that Henry’s comments have set in motion.

Key has also said that the High Commissioner’s response is enough, but he has not apologised himself, nor has he adequately explained his complicit silence.

However, the Nationals may take some solace in the Dominion Post’s editorial from Wednesday last week. The paper’s leader writer opined that Henrygate should lead to the selling off “to the highest bidder” of the emotionally and financially crippled national broadcaster:

TVNZ’s belated recognition of the untenability of its position is yet another reason for the Government to consider the broadcaster’s future. With its puerile news service and near-constant diet of reality shows and foreign programmes, TVNZ is indistinguishable from its private-sector rivals. It should be sold to the highest bidder.

This is a disingenuous argument. One could [and I will] make the entirely opposite argument and suggest that the failure of TVNZ to control Henry’s child-like humour and nasty streak  [two sides of the playground bully] is a result of the unsatisfactory fence straddling that TVNZ has to do as a malformed public broadcaster with commercial imperatives.

It is the chase for ratings that brought Henry to TVNZ in the first place and it is the addiction to advertising revenue that has kept him there. If TVNZ was a real public broadcaster that was adequately funded then they could afford to ditch Henry and the peurile audience he generates.

Audrey Young hints at this in her column from the Herald today:

Paul Henry was respected by a cross-section of politicians in the past because he often subjugated his own right-wing opinions and played devil’s advocate.

He was more careful when Labour was in office, whether consciously or not. Helen Clark welcomed him to New York to do her first big media number of the United Nations.

But under National, he has taken and TVNZ has allowed him a freer rein.

That has morphed into a situation where he will say outrageous things – things he hopefully doesn’t believe – to get the attention he and the channel’s advertising executives crave.

This entry was posted on Saturday, October 9th, 2010 at 5:28 pm and is filed under Celebrities, Whores and Losers, freedom of speech, New Zealand Media. You can follow any responses to this entry through the RSS 2.0 feed. You can leave a response, or trackback from your own site.

One Response to Oh Henry #4: He’s not a ‘legend’ and it’s not about freedom of speech