I continue to be amazed and disgusted that the baby herbal soup hoax continues to circulate on the interwebs, but I am also heartened by the fact that many people intervene in chat rooms and discussion boards where this incoherent gibberish is regularly upchucked onto the screen.

I came across one nice attempt to refute the baby herbal soup hoax on an Indonsian site Another Paths, written by a young Indonesian coast guard clerk, Asa S.

I don’t speak bahasa, so I got Google to machinetranslate the piece. I have not edited the transcript. If anyone can provide a more accurate translation, I’ll be greatful. 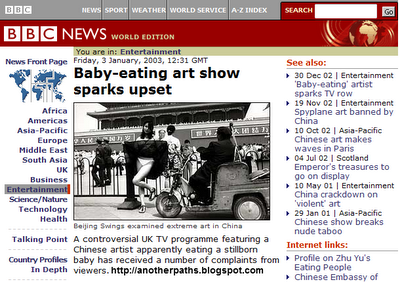 BBC News displays news about the fetus or Healty Soup Soup which was aired on British television in 2003 in Columns Entertainment. Although many know the lie of this news, but I still receive fuel from a handful of broadcast groups who do not know to spread the image Fetus Soup images via BlackBerry Messenger. Is that right? 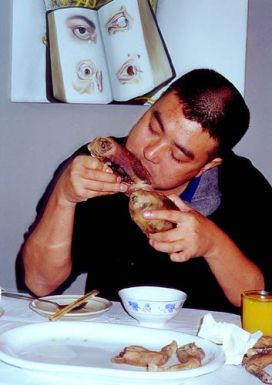 One example of Fetal Soup picture what I mean, you can see more photos here, and read news that is misleading passionate here, in a forum and also the results of its review [by Ethical Martini] here.

Not only Muslims, a Christian forum also had to believe, but this trit eventually removed after receiving denials from the readers. The most severe occurred in Scotland, the FBI and Scotland Yard (Metropolitan Police Service Centre) participate so that they do follow-up provoked a deeper investigation in 2001. Even The Guardian also had to load it in 2002.

Then if the news is true? of course not! try reading the last article from the BBC following. (Open in new tab).

News from the BBC on January 3, 2003 over the name of a contemporary Chinese artist named Zhu Yu. And it is clear that the photos that circulated only the result of Zhu Yu’s artwork is on showcase at the Third Shanghai Biennale in Shanghai China in 2000 under the theme “Fuck Off Exhibition”. The work of Zhu Yu’s controversy titled “Eating People”.

The exhibition which was held on November 6, 2000 attended by 67 participants, half (31) came from outside China, such as Matthew Barney (USA), William Kentridge (South Africa), Emily Kane Kngwarreya (Australia), Sarkis (Turkey), Anish Kapoor ( India / UK), Katsura Funakoshi (Japan), and Heri Dono (Indonesia), and so on.

Followed also by artists from China who lived around the world, such as Cai Guo-Qiang (USA), Huang, Yong-Ping (France), and Yan, Pei-Ming (France), etc. Compared with the previous Biennale, an art form far more varied, including paintings, multi-media, installations, video art, and conceptual art, etc. In addition, there are two-day international symposium held at the Museum. Many art critics, historians, and curators from around the world participated. Symposium theme is Cultural Fusion. (Absoluteart)

A rare image of Zhu Yu

Zhu Yu graduated from High School Affiliated Academy Art Center in Chengdu in 1991. He was born the same city in 1970. After the success of Eating People, in the following years many artists makes the creation of dramatic photos that seemed to justify the Fetus Soup. Actually there are other artists who showcase the work entitled Human disgusting Oil in the same year, but seems less interested media to disseminate it.

Watch videos of contemporary Chinese art is part 1,2,3 if still not believe.

This entry was posted on Saturday, April 2nd, 2011 at 8:06 am and is filed under Celebrities, Whores and Losers, China, folk devils. You can follow any responses to this entry through the RSS 2.0 feed. You can leave a response, or trackback from your own site.