From “hate media” to another fine mess: How media reform got derailed

Don Pedro of Aragon: “Officers, what offence have these men done?”

Dogberry: “Marry, sir, they have committed false report; moreover, they have spoken untruths; secondarily, they are slanders; sixth and lastly, they have belied a lady; thirdly, they have verified unjust things; and, to conclude, they are lying knaves.”

William Shakespeare, Much Ado About Nothing Act 5:Scene 1

May 19, 2011: On a mild mid-autumn day in Canberra, Greens leader Bob Brown held a fairly standard media conference to discuss climate change, emissions trading schemes and the carbon tax. During the Q&A session Brown mentioned The Australian and questioned why it was editorially opposed to making the big polluters pay. The following exchange took place:

Brown: “The Australian has a position of opposing such action. My question to you is ‘Why is that?’”

Reporter: “As they said the other day, when you’re on this side, you ask the questions.”

Brown: “No. I’m just wondering why the hate media, it’s got a negative front page from top to bottom today; why it can’t be more responsible and constructive.” [Interjection]

Brown: “Let me finish. I’m just asking why you can’t be more constructive.”

Actually, that’s a fair question. The Australian would rather parade the ill-thought opinions of buffoons like Lord Monkton that get to grips with climate science. The science doesn’t suit the business interests of The Australian’s real clients.

On that now fateful May day Bob Brown made the point that the maturity of the climate change debate in Australia is questionable:

Brown: “The Murdoch media has a great deal of responsibility to take for debasing that maturity which is informed by scientific opinion from right around the world.”

Brown’s comments were reasonable, but challenging the collective wisdom of the Murdoch press is never a good idea; it is at its most effective, ferocious, vicious and unforgiving when it is under attack.

Pack instincts kick in and that is what Bob Brown was facing that day on the lawns of the parliamentary courtyard. He was having a go at the coverage of climate change in the press and argued that The Australian’s reporting was “not balanced”, it was “opinionated” and “it’s not news”.

This was inflammatory stuff; several reporters snarled and barked back. Brown responded with a comment that really goes to the heart of this whole matter:

Brown: “You don’t like it when we take you on. Don’t be so tetchy, just measure up to your own rules.”

Unfortunately, but not surprisingly, it was the “hate media” grab – shorn of context – that made the headlines and the first (extremely rough) draft of history.

This was the genesis of calls for a public inquiry into media standards in Australia, but it was only the beginning.

News of the World? Not here it’s not!

In July 2011, Julia Gillard told the National Press Club that she was “truly disgusted” after reading of the News of the World transgressions.

Ah yes, NOTW. Two years ago, even Julia Gillard was saying News Limited had “hard questions” to answer after revelations that phones had been hacked on an industrial scale to feed the insatiable appetite of the British tabloid.

Most of us were disgusted with what we learned of NOTW; but how did we get from the “hate media” and “serious questions” about phone-hacking to the watery and vague reforms that Stephen Conroy is touting this week and that Malcolm Turnbull has – without seeing the legislation – labelled “unworkable and unnecessary”?

There’s a complex answer and a simple one. Which is really one answer that can be explained in great detail or in a few simple lines. For the sake of space and brevity, let’s take the second option.

The pointed truth is that there’s been a steady campaign against any reform of the current “see no evil” self-regulation system from media executives and particularly from News Limited columnists.

Since day one of the inquiry when Finkelstein and Ricketson held court in Melbourne the mainstream media has been hostile to any suggestion of change.

The coverage has been one-sided and, with few exceptions, the opinion has been virulently against any reform.

In effect, self-interested critics have been incessantly arguing the media regulation plans are designed to shutdown a hostile media and are an attack on free speech. Andrew Bolt chews at this issue like a dog after its own fleas.

But the “threat to free speech” line is not an argument that the anti-regulation ideologues actually believe, it is a populist sound-bite that plays to the rusted-on conservatives and provides talking points for the groupthink chorus.

The mantra from conservative spruikers is that the only good change is no change. And there will be no change, or at best, very little.

Ray Finkelstein’s mild suggestions were further diluted by the Convergence Review and as Labor’s electoral prospects have tanked in the last year, its reformist zeal has all but dried up.

Over the past twelve months the government and the Communications Minister have been subject to relentless editorial pressure and high-stakes lobbying.

There’s been endless discussion, compromise and promises that the reforms won’t stop business as usual. There has even been correspondence and meetings between news executives and the Prime Minister.

In August 2011, Gillard visited News Limited headquarters for what we were told was a full and frank discussion. The only problem is it was held behind closed doors.

The executives and shills who are complaining that mild reforms will throttle freedom of the press are the very same people who refuse to tell the public what they discussed with the Prime Minister.

The newspapers’ campaigns have been full of mis-statements and half-truths; exactly the same bulldust that they would have us believe they are protecting us from by being bombastic and huffily standing on their digs about attacks on freedom of speech.

That’s why it is disingenuous for the newspaper owners’ lobby group this week to call for yet more “consultation”.

By the same token the government’s handling of this issue has been a comedy of errors – and perhaps the last word is not for Shakespeare, but for true slapstick farce:

Conroy: “Here’s another nice mess I got you into.”

That of course is from the 1931 Laurel & Hardy classic, Chickens come home.

And make no mistake; the chickens will come home to roost on this issue once we’ve seen the form of the legislation to be presented to Parliament on Thursday.

But even that comes with a caveat. During his media conference on Tuesday, Stephen Conroy made the mighty threat that if the government could not get support for its legislation from the Greens and independents within a week or so, the bills would be withdrawn.

I can already hear the cheers and laughter from the News Limited bunkers. They have nothing to fear and they know it.

Today’s News Limited papers are a case in point.

Their coverage of the reform issue is just scare-mongering based on exaggerated claims about the powers of the ‘media advocate’ and an overblown sense of their own importance.

Today’s Australian has a ‘go-to’ buzzword “tsar” in its front page headline. The use of this word always amuses me. It is meant to be a reference to Stalinism, but the Russian revolution overthrew the tsars.

The modern tsars are the highly-paid and highly-ideological editors and senior columnists who populate The Australian; the Herald Sun and the Daily Telegraph.

News Limited’s campaign against even mild media reform is also clearly tied into the anti-Gillard / anti-Labor agenda that drives editorial decision making across the organisation.

If that wasn’t so obnoxious it might actually be funny in a gallows humour kind of way.

So, I defer to the first dog on the moon. 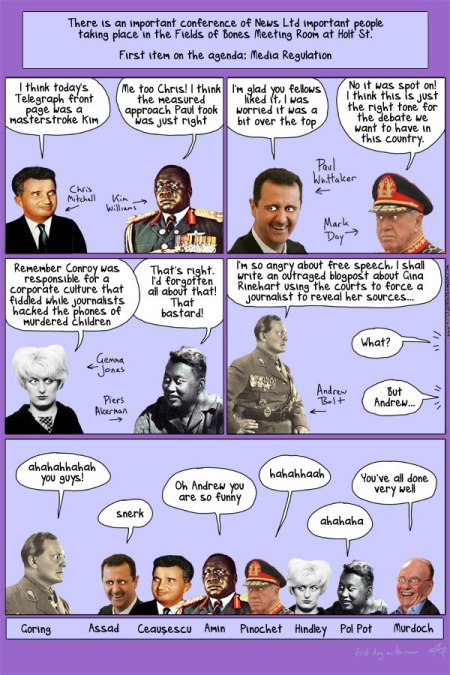 This entry was posted on Wednesday, March 13th, 2013 at 10:36 am and is filed under freedom of speech, journalism, journalism in the digital age. You can follow any responses to this entry through the RSS 2.0 feed. You can leave a response, or trackback from your own site.