Ah, so the new year starts as the last one ended with a fact-free front-page EXCLUSIVE, but this time, the culprit is not The Australian, but its sister paper, the Herald Sun published in Melbourne. 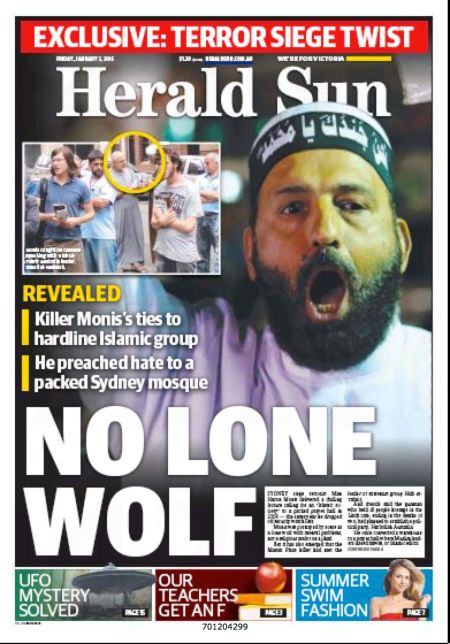 Don’t worry, its bark is worse than its bite

It really is like taking cheese from a mouse to pick on this sad excuse for a birdcage liner, but when it get as silly as this, I must call out the editor because, surely, it is his call to put such garbage on the front page. Take this for a lead (and remember the root word in “news” is new):

Sydney siege terrorist Man Haron Monis delivered a chilling lecture calling for an “Islamic society” to a packed prayer hall in 2009 — the same year he dropped off security watch lists.

Did you catch the date? It was five or six years ago, give or take a New Year holiday. And, wow, a Muslim who believes in an “Islamic society”; I bet there are not more than, Oh, I don’t know, let’s guess 1.6 billion people who might fit that description.

But, hey, Muslims; they’re dangerous, right? Yes, they are; not like the world’s estimated 2.2 billion Christians who go to church every week and listen to crazed men in long frocks calling for a “Christian society”.

Remember, how we weren’t going to tar an entire religion with the brush of terrorism because of the actions of one fucked up individual? No, neither does Phil Gardner, it would seem.

The Murdoch press is determined to have its Christmas cake and eat it too on the Sydney siege story and the Hun (like the other papers in the News Corp stable) is not about to let its readers forget that the rest of the wimpy, limp-wristed liberal media is soft on terrorism:

Monis was portrayed by some as a lone wolf with mental problems, not a religious zealot on a jihad.

That’s not entirely true: plenty of media outlets, including liberal ones, acknowledged that Monis claimed to be a terrorist and claimed to be on a jihad. 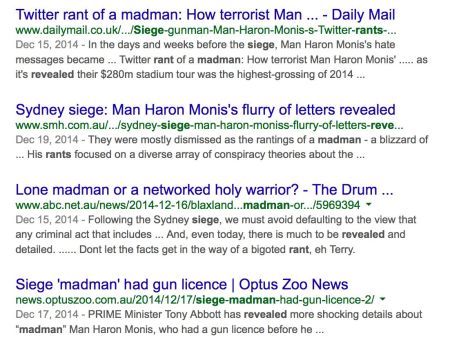 Many news outlets also acknowledged that the siege could, at worst, be regarded as an act of lone wolf terrorism. Even the Hun got into the act with this headline: “Siege madman’s rants revealed”. The paper’s sub-editors obviously need a stint in the re-education camp for cocking that up!

However, describing Monis as a “madman” is just not good enough according to the Hun:

But it has also emerged that the Martin Place killer had met the leader of extremist group Hizb ut-Tahir.

Right, and when was this? Perhaps in the days or hours leading up to the siege?

Er, no, not really. The Hun managed to find a picture of Monis talking to a leader of Hizb ut-Tahir on a public street, outside the Egyptian consulate in Sydney five years ago. That’s right; in January 2010. But that’s proof enough to generate a two-page spread under the chilling strapline TERROR AUSTRALIS 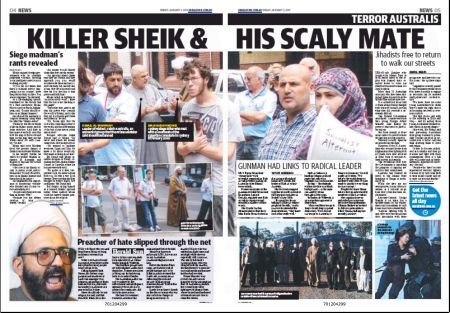 There he is, exchanging hummus recipes with another aspiring contestant for My Kitchen Rules

According to the keyboard interviewed for this story, Monis spent “two hours” talking to Ismail al-Wahwah at the 2010 rally. Geez, I wish my memory was that good. I can’t remember who I was talking to (or for how long) two days ago.

Speaking in Farsi in a converted warehouse – ring 000 immediately!

According to the Hun, Monis has given religious speeches — wrongly described in the article as “fatwahs” — and he “once converted a warehouse into a prayer hall”. Wow, that’s so deadly; it’s never been done before by other religions either.

Yep, that’s right, not even that other “death cult” Hillsong would think of using converted warehouses as places of worship, or what we might call a “prayer hall”.

Hillsong uses warehouses, trucks and giant spacecraft to preach its message of hate

God’s kingdom on earth, but it’s OK, that’s not the same as the Caliphate!

But it is what Monis actually said that should have us all quaking in our beds and thanking God (but not Allah) that he is dead. Luckily, I can share Monis’ thoughts with you because, the Daily Terror in Sydney has kindly made them into a colourful infographic:

I know, it’s not easy, but if you suspend all disbelief and try to believe really hard that the Murdoch rags tell the truth, then you will be able to read between the lines here and extract the real meaning from these random quotes.

If you click your heels twice while closing your eyes and crossing your fingers you might even end up back in Kansas.

Certainly, you would not hear any kind of preaching of this type from a minister of any other religion.

Just try it! Imagine for example trying to swap “Christian” for “Islamic” in the second quote, like this:

“The core of a Christian society is justice. Society should behave in a Christian manner.”

No, it doesn’t work; when you read it to yourself it doesn’t make sense. And what other religion would ask you to “say no to polytheism”?

You don’t know what “polytheism” is?

That’s OK, neither does Taylor Auerbach or the graphics team at the Daily Terror, but it’s a scary word and that’s all you need to know.

The Father, the Son and the Holy Ghost – but not polytheism!

He’s not mad and his raving lunacy proves it!

And remember how everyone but NewsCorpse got it wrong about Monis; how we all said he was a bit mentally unstable and not quite the full Monty. Well, it’s not true!

To prove it the Hun had his words translated from Farsi and published them EXCLUSIVELY so that we can know just how dangerous he was.

I’ve written the best of them down here for posterity and to save you the trauma of having to read the Hun (the following are direct quotes from Taylor Auerbach’s story):

He advised the audience to “explore meaning” using what he called the “Islamo-meter”.

“An enemy would bluntly claim that they are the enemy.

“An ignorant friend claims that they are friends and they approach you, you would socialise with them and associate with them, but one day like a bear, they lift a big stone and they hit to the face of that person and kills him.”

Monis called on Afghans to “in action not by word … show that the lion is not the king of the jungle”.

“Yesterday they used to say that the power who controls the world is Britain, and today they say it is Russia and China and America,” he said.

“No. Koran says that the God is the controlling power of the world, and the determinant of the fate of any nation is that nation itself.”

Yeah, thanks for that. Seriously, is that all you’ve got? If you had anything more damning you would have used it, right?

It’s clear from these extracts from his sermon that Monis was a threat. His words show that he was obviously sound of mind, with a great grasp of both religion and world politics, who (if he wasn’t dead) could have been a powerful influence on young minds and a recruiter for jihad.

But, it’s a pity that he was speaking Farsi, a language only understood by people from Iran, who are Shia muslim and opposed to ISIS and certainly not by radical Sunnis who are the core of ISIS and also Hizb ut-Tahir.

Notice too that there is no evidence presented in the Hun that Monis was preaching to Hizb ut-Tahir followers, or that anyone took him all that seriously.

The loneliness of a long-distance lone wolf

The point (for there always is one with the Murdoch media) of the Hun’s three pages on Monis is summed up in the headline: NO LONE WOLF.

The implication of this is what exactly? Perhaps that Monis was not acting alone when he lay siege to the Lindt cafe and caused the deaths of two innocents.  By making the tenuous link between Monis and Hizb ut-Tahir (over two whole pages) the stretchy implication is perhaps that this organisation is somehow implicated in the siege, the deaths and the aftermath.

I can’t see it myself, but then I’m not the target audience for this filth.

It is actually dishonest of the Hun to make this claim on its front page. There is no evidence at all that Monis was acting other than totally on his own.

He is the classic lone wolf as described in the literature on terrorism and terrorists. Unfortunately, for the mouth-breathers who write the drivel in the Hun, and the dribblejaws who edit the paper, such erudition is beyond their grade 3 reading skills.

However, I know that my audience is not afraid of the truth and can actually assimilate written material more complex than what we find each day in the NewsCorpse tabloids. So here is the definition of lone wolf.

The term Lone Wolf terrorist is used to refer to individuals pursuing Islamist terrorist goals alone, either driven by personal reasons or their belief that they are part of an ideological group (meaning a group of individuals who all claim to believe or follow a similar ideology: in this context, those who might be described as either members or followers of Al Qaeda or adherents to Al Qaedism). The term Lone Wolf [can be] expanded out to Lone Wolf pack when referring to small isolated groups pursuing the goal of Islamist terrorism together under the same ideology, but without the sort of external direction from, or formal connection with, an organised group or network.

Finally, and for the record, because you won’t find it in the Hun. Hizb ut-Tahir is a legal organisation in Australia. It is not a deemed terrorist organisation as implied in the Hun coverage.

Thanks for being here and as a reward for our patience, let’s all rock the casbah!

This entry was posted on Friday, January 2nd, 2015 at 6:43 pm and is filed under Celebrities, Whores and Losers, journalism, News Limited, Rupert Murdoch, sub-editing, terror frame, war on terror. You can follow any responses to this entry through the RSS 2.0 feed. You can leave a response, or trackback from your own site.