Wake up Charlies: Why these world leaders are a threat to you

How do you Charlie’s feel marching for peace alongside mass murderers and those the RSF calls “predators” of free speech? Confused? Stupid?

The killing of 12 journalists from French magazine Charlie Hebdo was a horrible murder carried out by crazed ideologues. I condemn it unconditionally…But…expressing solidarity with mass murderers and the enemies of freedom of speech is a backward step.

Read this statement from Paris-based socialist John Mullen on why the better sections of the French left marched separately and at a distance from the world leaders.

This letter from another French leftist also sets out some very cogent and nuanced arguments that non-French people should probably read. It outlines the difficulties of fighting fundamentalism and fascism at the same time. But it is the necessary form that solidarity must take — not the perverted version of marching with ghouls.

This is the difficult argument I am having with my French friends: we are all aware of the fact that the attack on Charlie Hebdo will be exploited by the Far right, and that our government will use it as an opportunity to create a false unanimity within a deeply divided society. We have already heard the prime minister Manuel Valls announce that France was “at war with Terror” – and it horrifies me to recognize the words used by George W. Bush. We are all trying to find the narrow path – defending the Republic against the twin threats of fundamentalism and fascism (and fundamentalism is a form of fascism). But I still believe that the best way to do this is to fight for our Republican ideals. Equality is meaningless in times of austerity. Liberty is but hypocrisy when elements of the French population are being routinely discriminated. But fraternity is lost when religion trumps politics as the structuring principle of a society. Charlie Hebdo promoted equality, liberty and fraternity – they were part of the solution, not the problem.

Solidarity is a fine and welcome human emotion. It shows that we are not all Ayn Randian sociopaths who will always place our individual comfort and wealth above the problems of others.

Solidarity is an expression of hope that the world can be a better place and it is a recognition that by coming together in collective action we can and we will change the world.

While the murder of journalists in cold blood by crazed Islamic terrorists can never be condoned and is rightly condemned by anyone of conscience; we cannot allow ourselves to be drawn into displays of solidarity unthinkingly and based only on a gut reaction to horror.

Think before you walk, zombie-like in the footsteps of the damned.

So this march of political 'leaders' for 'free speech' in Paris, was mostly leaders who hate free speech in their own countries.

Remember too, that the so-called “war on terror” has killed tens of thousands of Muslims (and others) right across the Middle East and now extending — via drone strikes — into Pakistan. It is not pens and pencils killing civilians it is bullets, bombs, missiles and chemical weapons fired and launched by Western armies instructed and financed by their governments.

For two good accounts of this read Lindsay German’s piece at Stop the War Coalition in the UK and Corey Oakley’s editorial in the Australian socialist newspaper, Red Flag. 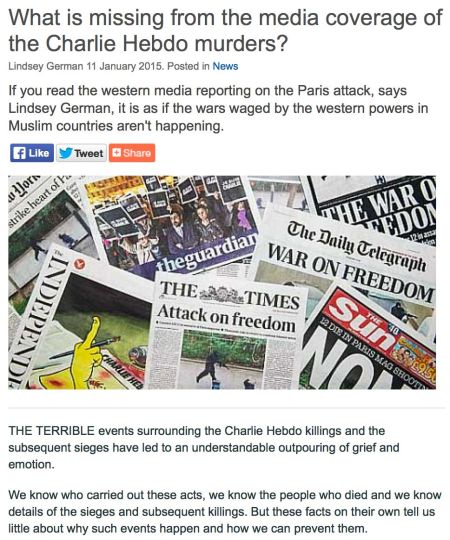 Yes Corey, me too.

Few things can honor the satire of #CharlieHebdo more than the satire of the Saudi amb marching in the #ParisMarch pic.twitter.com/QxLViSLa4S

Why is the presence of the Saudi ambasador such a disgusting slap in the face for the memory of the Charlie Hebdo journalists? Well, apart from being the largest state sponsor of Sunni terrorism and banning women from driving, there’s the slight problem of the Saudi state sentencing a young blogger to 10 years in jail and 1000 lashes from a cane. The first 50 lashes was administered on Friday last week when all the Charlies had their backs turned.

Even the loyal New York Times couldn’t ignore this story:

BEIRUT, Lebanon — The authorities in Saudi Arabia on Friday began the public flogging of a blogger who was sentenced to 1,000 blows, 10 years in prison and a large fine for starting a website that featured content critical of the country’s religious establishment, the rights group Amnesty International reported.

The floggings are to be administered with a cane over a period of months.

The blogger, Raif Badawi, was arrested after starting a website called “Free Saudi Liberals,” and he was later convicted of charges that included cybercrime and parental disobedience.

The case has drawn attention to the strict limits on freedom of expression in Saudi Arabia, a close Arab ally of the United States, and prompted unusually direct criticism from the American government.

Oh yeah, did you notice, Saudi Arabia is a “close ally” of the USA and what is “direct criticism”? Does it hurt as much as…let’s say 1000 whacks with a fricking cane?

Jen Psaki, a State Department spokeswoman, told reporters on Thursday that the United States was concerned that Mr. Badawi would face “the inhumane punishment of a thousand lashes in addition to serving a 10-year sentence in prison for exercising his rights to freedom of expression and religion.”

Oh, that’s alright then. Nothing about stopping the billions in military aid the Yanks give the Saudi princes.

And while we are in the region, let’s not forget Egypt and the jailing of Australian reporter Peter Greste.

Award-winning foreign correspondent Peter Greste was arrested in Cairo on December 29, 2013. He had been in Egypt only weeks, working on a short relief posting as a journalist for an international TV news network.

After a trial which attracted worldwide attention, on June 23, 2014, Peter was convicted of reporting false news and endangering Egypt’s national security. He was sentenced to seven years jail. He remains in Cairo’s Tora Prison.

Egypt's Foreign Minister marched in support of free press & speech in France today. This is the same country which imprisoned Peter Greste.

Here’s the text of the Reporters Sans Frontiers (Reporters Without Borders), the international organisation that defends journalists’ from government attacks.

Reporters Without Borders welcomes the participation of many foreign leaders in today’s march in Paris in homage to the victims of last week’s terror attacks and in defence of the French republic’s values, but is outraged by the presence of officials from countries that restrict freedom of information.

On what grounds are representatives of regimes that are predators of press freedom coming to Paris to pay tribute to Charlie Hebdo, a publication that has always defended the most radical concept of freedom of expression?

Reporters Without Borders is appalled by the presence of leaders from countries where journalists and bloggers are systematically persecuted such as Egypt (which is ranked 159th out of 180 countries in RWB’s press freedom index), Russia (148th), Turkey (154th) and United Arab Emirates (118th).

“We must demonstrate our solidarity with Charlie Hebdo without forgetting all the world’s other Charlies,” Reporters Without Borders secretary-general Christophe Deloire said.

“It would be unacceptable if representatives of countries that silence journalists were to take advantage of the current outpouring of emotion to try to improve their international image and then continue their repressive policies when they return home. We must not let predators of press freedom spit on the graves of Charlie Hebdo.”

However, this is only a partial list. There are several anti-democratic regimes who sent representatives to Paris who are not on this list. Luckily, we are able to crowd-source more names for you.

If you want more names and backgrounds check out this Storify by @DanielWickham93.

Big thanks to @TomEtty for composing this storify of my tweets on press freedom violators attending today's rally https://t.co/SNAfl1x5A6

Yes it is. the front lines of the march contained dozens of “world leaders” who turn their backs on media freedom and don’t hesitate to lock up journalists who expose their crimes and corruption.

The Index on Censorship publishes annual lists of the worst nations when it comes to suppression of freedom of expression and freedom of the press. It’s not a pretty list.

To celebrate the World Cup in 2014, Index on Censorship put together its own “group of death” list.

But wait, there’s always more. Here’s a map of Europe with reported incidents of violations of press freedom just from 2014. Press censorship is not just an issue in Africa and the Middle East.

Press freedom is not guaranteed, even in Europe

Here’s some background on Turkey from Index on Censorship:

In the past week alone, Turkey’s President Recep Tayyip Erdoğan and his allies have launched attacks on his former ally Fethullah Gülen and his followers, novelists Orhan Pamuk and Elif Shafak, and even supporters of Istanbul soccer club Besiktas. It would be foolish to attempt to rank these attacks in terms of importance or urgency, but the attack on the Gülenites is the most interesting.

Grotesque that at head of today's #ParisMarch was Netanyahu whose war on Gaza last August killed 17 journalists http://t.co/RtChArVcUE

Yes, perhaps the most grotesque of the whole cabinet of horrors in the frontlines of this march.

the Israeli government hides behind a curtain of “respectable” Jewish culture that accuses its enemies of anti-Semitism on a whim; but it is a murderous regime that commits war crimes on a daily basis — using children as human shields and murdering journalists without a second thought.

Here is a full, current list of those journalists who have been killed by the IDF while working in Gaza:

It should be emphasized that killing of journalists and media workers is a violation of international law. This crime must be included in any future investigations into the War on Gaza.

The U.N. Human Rights Council has announced that it has formed an international commission of inquiry into whether war crimes were committed in Gaza.

You can read more about this at CounterCurrent News.

Thoughtful blog post by @MichaelRosenYes explores some of the contradictions inherent in the Paris March http://t.co/34oOHao48O”

If I was in Paris, I would feel uncomfortable – to say the least – feeling that I was marching ‘behind’ or ‘with’ such people. Perhaps, physically, actually in the streets it will feel different – that there are two demonstrations – the leaders’ one where these rulers wrap themselves in flags hoping that their show of care and sympathy will make them look dignified and honest, and a people’s one where they can show solidarity and sadness about citizens like themselves being killed or the free circulation of ideas being stifled.

Are you ready to reconsider your Charlieness now?

This entry was posted on Monday, January 12th, 2015 at 8:32 am and is filed under Celebrities, Whores and Losers, freedom of speech, imperialism, journalism, laws against journalism, media and democracy, media and terrorism, Palestine. You can follow any responses to this entry through the RSS 2.0 feed. You can leave a response, or trackback from your own site.