Groupthinking or just not thinking? “Bedwetters” in the NewsCorpse bunker?

The most entertaining aspect of the slow disemboweling of Two Punch Tony has been the serial flip-flopping by the over-priced keyboard warriors in the NewsCorpse bunkers.

Bolt talked about the "astonishing witchhunt" against Peta Credlin on 2GB last night. All triggered by his boss @rupertmurdoch of course.

Astute observers of the Murdoch press in Australia are not surprised to see only one version of the hymn sheet being printed each day, but then we watch, smirking, as the various soloists each wobble to the microphone to sing their allotted verses accompanied by the cacophony of the discordant Greek chorus standing beyond the ghostly glow of the footlights.

This sort of thing. 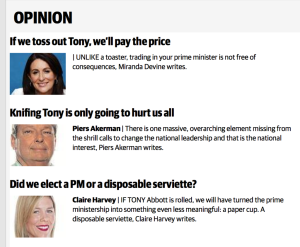 A hatrick of keyboard monkeys, they must be right.

It might just be a case of magical thinking — you know, if you wish really really hard then something will come true. Or, it might just be that for the Right Wing columnists in Rupert’s employ the thought of a small ‘l’ socially liberal Liberal turns them into “bedwetters“.

And the two-faced doublethink is amazing from these Orwellian reptilians.

Actually, this is not journalism either.

Who are the bedwetters?

From what I can tell and with the assistance of Dr Google, the term “bedwetters” was introduced into the debate about the Liberal leadership by that model of decorum and good taste, Scott Morrison.

Mr Morrison has described the media briefings as the work of “political bedwetters’’.

Both Morrison and Bishop attempted to minimise the latest round of disquiet – Morrison terming it “a bit of political bedwetting” and some “low-level rumbling trying to talk itself up.”

Morrison was here talking about the Liberal insiders who have been briefing the press — you might call it leaking, or in line with the new micturatory tone of the debate, “pissing in the pockets” of selected denizens of the Canberra Press Gallery.

But that was today,Morrison used “bedwetters” late last week in a radio interview and it was reported in The Guardian and the SMH on Friday. It’s good that Samantha Maiden finally caught up on Sunday.

I saw the term used in an editorial this weekend too. And no prize for guessing which august national journal of ridicule lowered the tone yesterday.

THE bed wetters, serial miscreants and executive panic merchants of the Liberal party need to reflect on recent history and hold their nerve amid the current political tumult.

Yes, it is in bold type and what a way to start an editorial in a family newspaper. I am pleased that I never let my children read this adolescent, bullying jibber-jabber.

The Australian has been herding the cats into line behind Abbott for a couple of weeks now; the tone has hardened in the opinion pages and anyone not on Team Abbott is on reduced rations.

Mixed messages from the Oz. Lost in translation?

Peter van Onselen is one who may not be drinking his share of the kool-aid and his opinions have gone off piste recently. He is still listed as a “contributing editor” for The Oz on the Sky News website, but in the paper this weekend his title is given as “professor at the University of Western Australia”, so I’m not sure of his status inside the NewsCorpse bunkers.

In early 2011, in addition to his journalistic duties Peter became a Winthrop Professor and Foundation Chair of Journalism at the University of Western Australia.
Peter van Onselen, Sky News bio

I do find it curious though how Peter can hold down a Professor’s job at UWA and also be on Sky News all the time and write columns for The Australian.

Now I am wondering if he’s been demoted as part of the deck-chair shuffling that has recently been reported. Or is he just making way for more “Sharri sludge”?

Is PVO losing the faith?

However amusing we find that bit of insider gossip, that’s not the point. The point is that over the past month van Onselen has written nine columns which I do not think have sufficiently carried the pro-Two Punch lines.

van Onselen’s new found independence is refreshing, but let’s not get too carried away. Like many of his fellow NewsCorpse bunker dwellers, PVO has also done a tour of duty as a staffer with the Liberals in Canberra.

He may be a bed wetter for now, but he is one of their most loyal bed wetters.

Thank God (and I mean that literally), other NewsCorpse hacks have stepped up to be more fulsome in their support of Two Punch.

Dennnis, Chris and Greg scoff at the bed wetters and will follow Tony into the Valley of Death, because theirs is but to do, or die.

Though, perhaps Greg needs to tone down the bromance just a tad, lest he be shamed as a closet bed wetter too

And the oldest horse in the stable has also had to be brought back into line. Paul Kelly’s summer break must have reset his brain somewhat because earlier in February he too was wavering in his support for Two Punch:

“Ouch! This hurts me more than it hurts you Tony.”

“Adolescent chaos”? Strong words from Kelly, but he finally came ’round to the right position.

No bedwetting from the NewsCorpse true believers. It’s just not on. Because, of course, the macho-macho atmosphere of the Liberal Party has no truck with bed wetters as bed wetting is obviously a sign of disloyalty and perhaps less than manly disposition. Such namby-pambyism is anathema to the strong men who surround Two Punch.

And in the NewsCorpse bunker there is no stronger man than Andrew Bolt. He is a one person crusade to ensure Two Punch hangs on.

Yes, it’s the ABC’s fault and those effete commies at Fairfax.

You know things are bad inside the Liberal Party when even Turnbully has had to come out and deny that he is himself an habitual bed wetter.

So he has taken his place at the urinal while the rest of us get drenched.

All we need now is a @RupertMurdoch tweet endorsing Scott Morrison and he'll be in like Flynn with a bottle of Gin and a smug grin. #auspol

And no, it’s not just pissing in the wind.

This is pissing in the wind.

This entry was posted on Sunday, March 1st, 2015 at 7:58 pm and is filed under australian politics, Celebrities, Whores and Losers, journalism, Politics (capital P). You can follow any responses to this entry through the RSS 2.0 feed. You can leave a response, or trackback from your own site.