This week one of the biggest political stories of the year has broken, but The Weekend Australian has buried it on page 9. 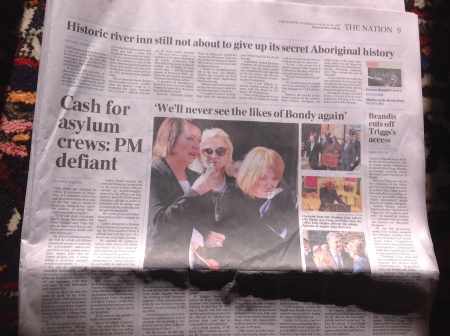 This is not even original reporting. It’s a cobbled together story based on cribbing quotes from other news outlets.

It’s only in the paper because the editors know that if The Weekend Australian ignored it completely, its credibility would suffer even more.

It is an astounding example of skewed editorial judgement.

Because, the story is highly damaging to the Abbott government and the News Corp leadership has firmly nailed its flag to the mast of what is more and more looking like a pirate ship of fools.

The framing of the story — carried in the headline and lead par — set the tone: The Weekend Australian is right behind Abbott on his denials.

Denialist–in-chief, Chris Kenny is leading the head-in-sand brigade on this issue.

LOL – the dudes who’ve got this wrong for a decade are now the experts on border control https://t.co/ngcycfyqgQ

Now the paper is scrambling to regain some initiative on this story, but the reporting still won’t directly accuse anyone of anything, instead promoting the continuing obfuscation, denials and no comments from senior members of the government.

However, this story is not going to die off any time soon. Indonesian officials are saying they’ve seen the wads of cash in $US bills and the people smuggler allegedly at the centre of the pay-to-return deal has been located and named.

Now the United Nations is weighing in. It is a story will a long way to run yet.

Watch this space, but don’t rely on The Australian for the facts.

[I will have more to report on this story soon, right now it’s Sunday and I’m going out for lunch]

This entry was posted on Sunday, June 14th, 2015 at 12:48 pm and is filed under News Corporation. You can follow any responses to this entry through the RSS 2.0 feed. You can leave a response, or trackback from your own site.