Trump’s Aussie friends are a bunch of deplorables

Given the US election result, you might be in the mood for a joke; it goes like this.

Set Up: Which one of Australia’s biggest media bullies who pretends to moral outrage at the use of profanities has just broken their own rules.

Yep, Australia’s ‘most read’ columnist calumnist, who howls like an offended snowflake when anybody swears in his presence or anywhere near him, began his column on the Trump victory with this classic line:

DONALD Trump’s win is the biggest “f— you” to all his enemies — the media, the politicians and Wall Street.

Don’t be so coy, Andrew. A f—ing 12-year-old can read those dashes. Why pretend you don’t like dropping the F-bomb?

Bolt goes on to write that the ‘whole world’ and ‘our political class’ has been given ‘a shock and a warning’.

The shock is easy to register and now it’s had time to really sink in, we can begin to process the meaning of it: Donald J Trump, billionaire and reality TV ‘star’ is the 45th President of the United States of America.

But what is this ‘warning’ that Dutchie is warning his readers about?

Stop bullying and patronising the silent majority or they will rise in terrible revolt.

It’s a pity that the worst types patronising bullies are often the last people to heed their own advice.

Like all good NewsCorpse writers, Bolt is wilfully blind to his own position in the media elite. He and they have to pretend that they are not part of the establishment, otherwise their wise words would just read like hypocrisy and cant.

Wait a minute, they are part of the establishment and their words do read like hypocrisy and cant.

Before we get to the heart of the matter – the rise of Trumpism in Australia, let me offer a couple of brief examples of the weasel words offered up by the establishment apologists like Bolt and Co.

Bolt is clever in the way he pitches his pro-establishment lines to his working class readers; it is the same rhetorical trick that served Trump so well during the presidential campaign.

Bolt likes to claim that he is an outsider, and that he is anti-establishment; but to do this he must hide his deep connections into the Australian ruling class. He does this by attaching the word ‘Left’ to everything he despises, such as in this passage from his gloating blogpost saluting the Trump victory. Bolt is derisive of Clinton and her supporters who he claims sneer down their noses at the non-elite:

This pulling of rank no longer works.

Not with the poor who see these new moralists leading five-star lives in first class.

Not with workers who see the Left establishment destroy their manufacturing plants and — yes — power stations in the name of their global warming faith.

Not with people who find themselves abused as racists for protesting against the Left’s new craze to divide us into tribes.

Not with the poor who see their jobs taken and their streets made violent by the mass immigration from the Third World that the Left hails as a sign of its broad-mindedness.

Hang on, isn’t Trump claiming the high ground of a ‘new moralist’, aren’t Trump and his henchmen like Rudy Giuliani and John Barron living ‘five star lives in first class’?

What is the ‘Left establishment’? It is not the Left that has destroyed manufacturing in the United States, it is Wall Street and ‘billionaires’ like Trump who make the investment decisions. The Left is powerless to stop this, it is the logic of the system that dictates the economic future of the so-called ‘rust belt’ states where much of Trump’s support comes from.

And who are these brave anti-racists who don’t want to retribalize America (or Australia for that matter)?

Bolt won’t tell you, because the truth is not a good fit with his narrative of white dispossession by ‘the Left’, but this little website lets the racial cat out of its whiter-than-white linen bag. The site is called White Nationalism and it offers a very useful QandA for would-be white supremasists.

What is White Nationalism?

Q: What is White Nationalism?

A: The idea that Whites may need to create a separate nation as a means of defending themselves.

Q: Do White Nationalists feel they are superior to other races?

A: No. The desire of White Nationalists to form their own nation has nothing to do with superiority or inferiority.

Q: Well if White Nationalists don’t feel superior, don’t want to dominate others, and don’t seek protection from competition, then why would they want a separate nation?

A: To avoid exploitation.

Q: Exploitation? This is rich! So how is it that Whites are exploited?

A: It is a long list…But the most exploitative aspect of the situation is that neither the racial quotas, the business preferences, the loss of freedom of speech, nor the disproportionate contributions to the welfare state have managed to sate the appetites of non-whites living in the United States.The more Whites sacrifice, the more non-whites demand. Many Whites are beginning to believe that no amount of tribute, other than mass suicide, would satisfy the non-white demands.

If our presence stirs up that much hatred in the hearts of non- whites, then the only sensible course of action is to separate ourselves from them.

You see, it is everyone’s fault but the poor exploited whites. This is the new culture war and Donald Trump’s elevation to the White House means that it is about to get ugly.

As the statement from Dutchie shows, it is now a form of right-wing political correctness to blame ‘the Left’ for the problems and to claim that bombastic sociopaths like Donald Trump are the answer.

Of course, decent human beings (Dutchie is not one of us) are horrified by the glorification of racists and the rise of a white nationalist cultural movement in the United States (and here).

The human and civil rights organisation, the Southern Poverty Law Center has been tracking the rise of white nationalist groups for many years and it describes several types, from the obvious neo-Nazi Stormfront (‘White Pride World Wide), to the Alt Right’s cultural warriors at Brietbart News who use polite language to make the same points.

As the SPLC reported, it is groups like these who are cheering the loudest for the Trump victory. Bolt is careful not to link himself directly to these brave patriots, but he shares their sentiments even though he might not say so publicly.

The Stormfront news site, Daily Stormer wrote about the Trump victory in the following almost biblical terms under the simple headline ‘We Won’.

The ‘revolution’ that Trump has supposedly ignited on behalf of the disaffected whites of the USA is also celebrated at Brietbart News as the ‘Nuclear Option’.

In the Republican revolution, Mr. Trump gave voice to voters who have been ignored by GOP leaders for decades. He gave them a voice and together they changed the party’s stance on immigration, trade, economics, national security and globalism.

He uprooted and altered the very language the party spoke. The whispered tiptoeing of political correctness was slain.

These are Trump’s friends and Andrew Bolt is friends with them on the grounds that they are enemies of his enemy.

Trump has friends in Australia too, not only among drunk young Liberals at the University of Sydney who disgraced themselves last week at a party in the Manning bar.

Supporters of US President-elect Donald Trump were kicked out of an election party at the University of Sydney after they became rowdy and started chanting “grab them by the pussy, that’s how we do it”.

Just as charming was the crowd that gathered at the Rugby Club in Sydney on election day. A few notables to mention: Brownwyn Bishop, Mark Latham, Rowan Dean, Miranda Devine and Janet Albrechtsen. The host for this gathering of deplorables was Sky News commentator and former Liberal MP, Ross Cameron. Rowan Dean edits the Australian edition of the conservative Spectator, Albrechtsen is a columnist calumnist with The Australian, and both are regulars on Dutchie’s poorly-rating television show.

A few less well known Trumpistas also took a drink in celebration, including Anne, who sounds like a right charmer.

Anne, who works as a solicitor in the city, is a self-described Trump fanatic who’s followed his campaign religiously ever since he first announced his candidacy in May 2015. She believes Hillary Clinton is “corrupt”, destabilised the Middle East during her tenure as Secretary of State and can’t solve America’s crime problems.

“I work in criminal law, and the people who come through the courts now, they’re all ethnics,” Anne says.

She can’t understand why most Australians seem unenthused by the prospect of a Trump Presidency. “All the women who I work with like Hillary, I think they’re bloody stupid.”

Yep, thanks Anne, if I ever need a solicitor I won’t be calling you.

However, Anne is not the real problem, there are white nationalists in Australia too and one of their leading figures is a self-proclaimed lover of Mien Kampf. Der Fuhrer of the United Patriots’ Front is a charming man called Blair Cotrell and he has posted a seven-minute tribute to the Trump victory on the UPF Facebook page. This is scary enough, but the comments thread is even scarier. 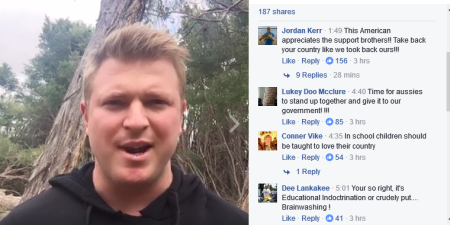 Der Fuhrer has some advice for Donald Trump, it’s the sort of advice that Dutchie also likes to give, but Herr Cotrell is a bit more forthright in his language.

The first thing is a security agency must be established [or CIA/FBI ‘revitalised to its former glory’] purely for the purposes of identifying the hostile people in places of influence – in media, governments, education – compiling information on these people, finding out who they are, prosecuting them, or physically removing them, extracting them from their positions of influence.

This must happen, a security agency must be set up purely for this purpose…These people must be torn out…as though they are a deadly sickness, because that is exactly what they are…

Second, what must happen…The education system must be re-formed (Der Fuhrer’s emphasis) [because it produces Marxist ‘idiots’, who can’t be re-educated]

Yes Siree, Trump’s Aussie mates – from Bolt, to Anne and on to Der Fuhrer – are a deporable bunch.

This entry was posted on Sunday, November 13th, 2016 at 5:35 pm and is filed under American politics, News Corporation, Uncategorized. You can follow any responses to this entry through the RSS 2.0 feed. You can leave a response, or trackback from your own site.