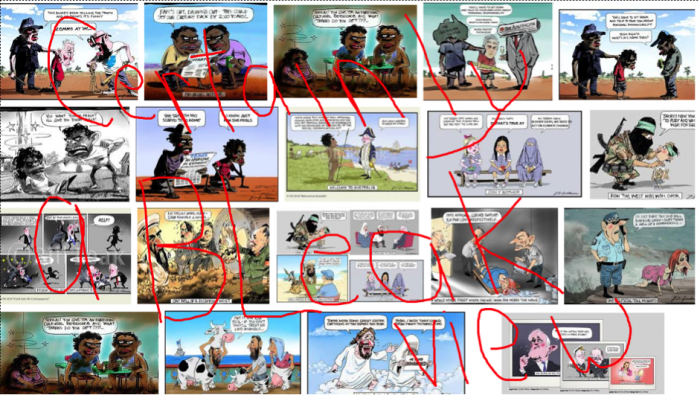 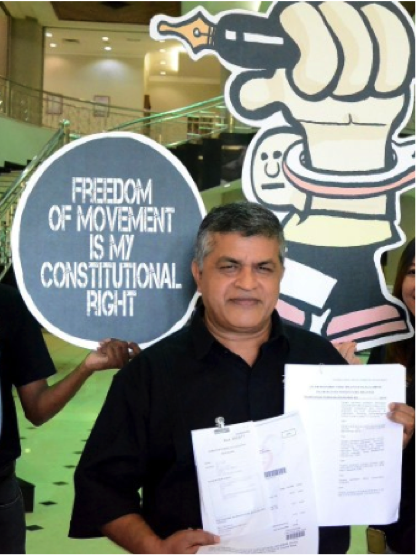 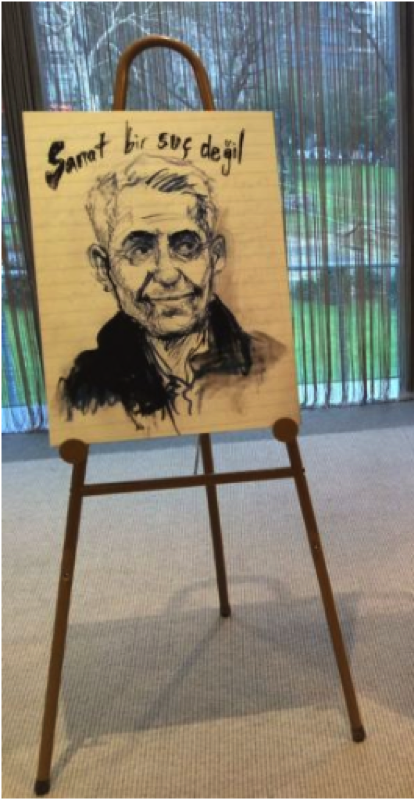 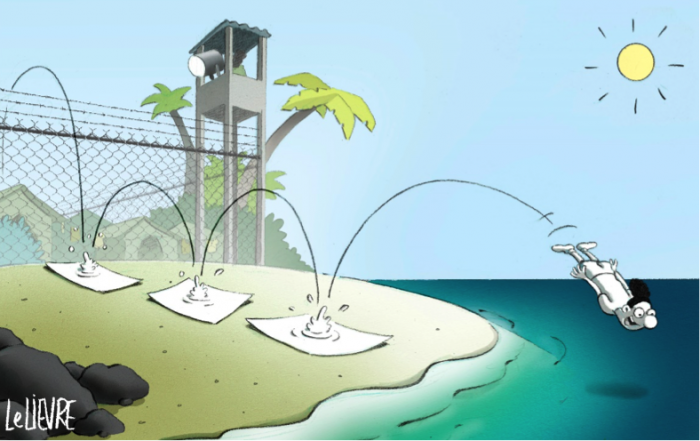 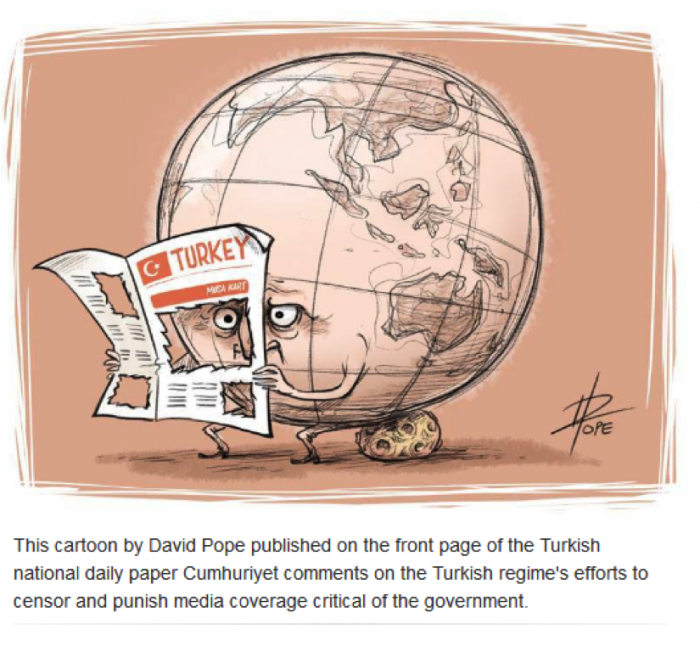 Despite a campaign for his release, now in its sixth month, Immigration Minister Sinister Mutton refuses to help Eaten Fish.

I cannot tell his story any better than this:

‘Bizarrely he [Eaten Fish] was expected to prove the assaults to the satisfaction of PNG authorities. He was unwilling to identify his assailants because of his fear of retribution and of course any assaults take place well away from the compound guards’.

However, there is one surprising omission from this list. It is none other than the loud and proud free speech fundamentalist, Mr Bill Leak – or as I like to call him BLeak – of The Australian.

Leak is no stranger to politically-motivated attacks on cartoonists. He regularly claims to be the victim of left-wing jibes motivated by political correctness gone mad. Of course, he also denies, denies, denies that he draws homophobic and racist cartoons. His defenders even invoke anti-Nazi priest Martin Niemoller in his dubious honour.

I sought comment about this from some of Australia’s premiere cartoonists. Their collective response was so good I thought IA readers deserved to read it, in full, for themselves.

Why is it important for you to support your fellow cartoonists?

I think cartoonists are an important voice in the world. I also think one has an obligation to try and support people in one’s own profession who are in trouble, it’s a belief in the power of union.

The MEAA has been running a campaign for the cartoonist Eaten Fish, the journalist Behrouz Boochani, and the actor Mehdi Savari, all of whom have professions that come under the MEAA’s remit. This isn’t to say that the other asylum seekers on Manus and Nauru should be there either, no one should be indefinitely incarcerated for seeking asylum, but you have to start somewhere.

As a cartoonist lucky enough to be working in Australia, I can only admire the bravery of artists working in countries like Turkey, Iran and Malaysia and yet refuse to pull their punches.

You have been subject to political trolling too, how does it affect you?

I don’t get too much trolling, and what I do get is obviously from people who are so fixed in their beliefs of something they would be impervious to argument and fact, so I ignore them. The generally totally illogical nature of their arguments does upset me, it makes me worry that there is no hope of making things better.

Meh. Not that much. Comes with the gig. I have a rejection slip I send to any critics I really want to piss off: ‘Thank you for your comment but we regret to inform you that it doesn’t suit our needs at the present time.’

Why are cartoonists such big targets, aren’t you just telling jokes?

If you’re time poor and have a short fuse, why force yourself to wade through an 800-word column, when it’s far quicker to get offended by a single drawing? As with most things, instant gratification rules.

Two answers, firstly, everyone doing anything publicly is a target nowadays. Secondly, cartoons often go to the heart of a matter, pointing out what is wrong, and people hate to have their fortifications broached.

Cartooning is like satire, it seems very political, with only a few lines and a bit of colour, what motivates you?

Cartooning can use satire as a tool, and it can be very political, although it isn’t necessarily. Otherwise the phrase ‘political cartooning’ would be a tautology.

I am motivated by wanting to make the world a better place, which means a concern with the inequalities of society and the world. I believe that what Australia is doing with asylum seekers is very wrong. It is immoral to treat people in this way.

Are you at all surprised that Bill Leak hasn’t drawn a cartoon yet for Eaten Fish or Musa Kart, given his strident and vocal support for freedom of expression?

Bill is a contrarian. The best way NOT to get a drawing out of him is to tell him everyone else is doing one.

This seems like a red herring question. The problem for Eaten Fish is incarceration, not censorship, except perhaps as a consequence of incarceration. I can’t speculate on Bill’s motivations. Maybe he hasn’t come across the campaign. Maybe he’s only just coping with the work he has to do to make a living.

You could equally ask why Michael Leunig hasn’t done a cartoon for Eaten Fish, given his love of the human spirit and belief in the soul of the artist able to wander freely. There are plenty of well known cartoonists who haven’t done cartoons for this campaign, I don’t think it’s our place to draw narky conclusions about their absence.

Discarded pizza boxes are an inexpensive source of cheese.

After taking advice from the cartoonists I spoke to, I decided not to approach BLeak or The Australian for comment.

I did not ask Leak or his publisher for two basic reasons:

BLeak obviously works too hard. His *official* website says he is too busy to respond personally to FAQS because he works 12-14 hours a day on his editorial cartoons. All I can think is that he must do lots of drafts before the editors are happy because his work is not that technically difficult or proficient.

So, let’s just leave it here, for now.

This entry was posted on Monday, February 13th, 2017 at 11:18 am and is filed under australian politics, freedom of speech. You can follow any responses to this entry through the RSS 2.0 feed. You can leave a response, or trackback from your own site.