The bombing campaign and missile attacks on Syria began a few hours ago. Supposedly targeting military sites, there is no word yet on civilian casualties, but its certain there will be plenty. Assad, like most dictators, likes to keep his military bases close to civilian centres and no matter how “smart” Trump’s missiles are, a few will surely miss their targets.

I wrote this before the bombing began, but it is still relevant.

Neither Washington, Moscow, nor Damascus — long live the Syrian Revolution

U.S. President Donald Trump has pushed the world to the edge of a new conflict by threatening a missile attack on Syria. Russia has responded with threats of its own, foreshadowing a new Cold War. Political editor Dr Martin Hirst examines the potential fall-out from the escalating rhetorical duel between rival superpowers. 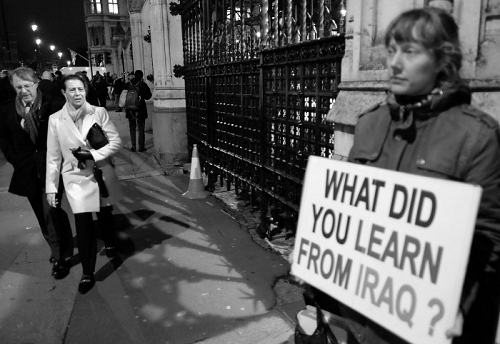 The definition of insanity is doing the same thing over and over again expecting a different result (Image by Alisdare Hickson via Flickr [CC BY-SA 2.0])

THIS WEEK, I was reminded of the life and work of one of my Marxist heroes, Tony Cliff. Cliff was a founding member and leading theorist of the International Socialist Tendency and famously coined the term “state capitalism” to characterise the degraded socialism and despotic regime in the Soviet Union. The politics of Russia have changed, it is now a rampant capitalist oligarchy, but “state capitalism” remains the economic policy of the Putin regime.

Thinking about Tony Cliff also prompted me to note that he would have taken a very firm position on the conflict in Syria and he would have been vehemently opposed to the Trump regime’s threats to rain down ‘nice and new and “smart”‘ missiles on Damascus.

However, Cliff’s opposition to a U.S. military strike against the Assad regime – supposedly in response to a chemical weapons attack on civilians in the rebel-held enclave of Houda – would not be based on misguided love for the criminal Assad. Nor would it be based on the mistaken view that Russia is somehow “better” than the United States in terms of the Syria conflict.

(In case you’ve not been paying attention, Russia is committed to propping up the Assad Government while ostensibly fighting Islamic terrorism. In retaliation for Trump’s provocation, Russia threatened to shoot down any U.S. missiles fired at Syria.)

Tony Cliff was an International Socialist and, therefore, would not be advocating for taking the side of either of the imperialist powers in their proxy war being fought in Syrian airspace. Understanding Cliff’s background is important here.

Cliff was born Yigael Gluckstein, a stateless Jew from what was then Palestine. He was born in 1917 – coincidentally the first year of the Russian revolution. In his youth, Cliff was a member of the Revolutionary Communist League in Palestine and left for Britain in 1947, effectively exiled for his anti-Zionist political activity.

At the height of the Cold War, when it seemed that the Soviet Union and the United States might actually launch an all-out nuclear strike on each other, the International Socialist Tendency adopted the slogan, ‘Neither Washington, nor Moscow, but international socialism’.

Today, Tony Cliff would be urging all progressive people to unite behind a similar slogan when it comes to the conflict in Syria. To round out the political message, he would perhaps suggest the following edit:

“Neither, Washington, Moscow, nor Damascus.”

To explain this clearly, a little bit of history is necessary.

The conflict in Syria began with an uprising against Bashar Al-Assad during the ill-fated Arab Spring of 2011. At the heart of the Syrian resistance was a largely secular working class movement which drew strength and inspiration from events in Egypt and elsewhere.

The Syrian revolution grew quickly, and Assad’s response was swift and brutal. He reasoned – as most desperate despots do – that it would be better to destroy large swathes of the nation than see Syria fall into the hands of the rebels.

Assad’s brutality extended to indiscriminate mass murder of civilians through air strikes on some of Syria’s largest cities; the imprisonment and torture (often to death) of his opponents and the deliberate targeting of foreign journalists bravely covering the conflict from behind rebel lines.

It is hard to imagine the scale of destruction Assad’s air force and brutal shock troops have leveled across the country. There are plenty of YouTube videos to remind you just how devastating this conflict has been over the past seven years.

Half-a-million civilians have been killed and twelve million or more forced to flee Assad’s jet fighters and helicopters dropping barrel bombs. Sunday’s alleged chemical strike on the besieged rebel redoubt of Douma, which has led to the latest threat of more American bombing of already flattened cities, is just the latest in a long-line of atrocities that has been laid at the blood-stained feet of Assad and his cronies.

But this is where it gets a bit confusing. The American, British, French and Australian governments have all blamed the Assad regime for the chemical weapon attack – possibly using Sarin or Chlorine gas – but the Syrians and their Russian allies deny any responsibility.

Who to believe on the Syria question?

Well, you can make up your own mind. I’m perfectly comfortable believing that it was the Assad regime. Why?

History tells us that violent, repressive regimes like the present Syrian leadership will do anything to stay in power. It is the regime that has the means and the motive to carry out the attack and it has form, despite its denials.

But, you will hear and see all sorts of regime apologists coming out of the woodwork to suggest that it was not the Assad regime, but the rebels themselves, staging a “false flag” attack in order to provoke the Americans into an intervention designed at “regime change”.

But you don’t need to believe me, here’s what Syrian photojournalist, Loubna Mrie, wrote recently about these “leftist myths” of a benign Assad:

For me, it is unfathomable how people who have stood up for social justice and human rights across the world remain in support of a regime that has exploited its population economically and tortured and killed innocent civilians in the most horrendous ways possible. Or how people who had seen through US imperial war propaganda cannot see through the Russian equivalent of it.

To the misguided defenders of the Syrian government, Assad is an anti-imperialist hero who is valiantly fighting an Islamic State style terrorist organisation that seeks to overthrow a democratically elected (and popular) leader.

For this group, the intervention of Russia in support of Assad is a mighty blow against U.S. aggression in the Middle East and therefore to be applauded and supported.

Here again, the parallels with Cold War politics on the Left are apparent and provide an important marker of right and wrong.

The blind defenders of the Soviet Union on the Western Left were rightly characterised as “Stalinists” by the International Socialist Tendency and other Trotskyist groups. What they meant by this was these sections of the Left displayed a misplaced loyalty to the idea of a socialist homeland in the USSR that patently did not live up to the myth.

Cliff and the international socialists were alone on the Left in rejecting this nonsense in favour of a view that acknowledged the destruction of the Soviets (workers’ councils) in the 1920s after Lenin’s death and the degeneration of the Soviet state into a despotic regime that existed not to export socialism to the world, but to compete with the United States for the title of global hegemon.

Two signal events proved Cliff right in his analysis – the Soviet invasion of Hungary in 1956 and the invasion of Czechoslovakia in 1968. Both of these interventions – spearheaded by Russian tanks – were aimed at supressing popular working class uprisings against the austerity and brutality of Stalinist rule.

The Stalinist tendencies on the Western Left earned the nickname “Tankies” for their unwavering support of the Soviet interventions.

The modern equivalent of the “Tankies” support Assad and the Russians in Syria.

They are wrong and they are on the wrong side of history.

So where are we today?

Well, a brutal and intense seven-year civil war has all but wiped out most of the military opposition to Assad. In city after city, a systematic assault on rebel-held areas has reduced the Syrian opposition to a rump. But, let’s be clear, it is not just an ISIS hold-out.

Characterising the Syrian resistance as an Islamic State-style grouping is wrong and disorienting. The Islamic State stronghold in eastern Syria and northern Iraq has largely been defeated — thanks to a relentless campaign of Western and Russian airstrikes in support of Syrian, Turkish, Kurdish and Iraqi troops on the ground.

The final pockets of resistance to the Assad regime are not Islamic State fighters, but besieged civilians who are clinging to their dream of a free Syria.

We also need to be clear that Western nations – like Russia – have a long history of intervention in Syria, initially arming the groups who formed the ISIS caliphate and actually encouraging them to attack their erstwhile and non-Islamic allies, the Free Syria Army and other factions.

Why did the West fund and arm the Islamists? Primarily, it was because they wanted the Assad regime to fall — but not into the hands of the secular rebels. This would have removed Syria from the influence of the West and would have meant that Syria’s strategic position in the Middle East and its oil reserves might fall into the “wrong” hands.

Russia became heavily involved in propping up the failing Assad regime when Putin realised that he could drive a stake into the Syrian sand that would thwart American ambitions and give the Russians a position of strength in the Middle East to pursue its own imperial ambitions.

Any idea that Russia’s intervention in Syria has anything to do with human rights and democracy is just a Tankie’s wet dream.

Russian and American motives in Syria are as identical as they are diametrically opposed.

Both global superpowers want any effective carve up of Syria to benefit their ambitions — and theirs alone. For both sides it is a zero-sum game. The victory of one superpower is at the cost of the other.

That’s why the stakes are so high.

It is also the simple reason why taking a “side” either pro-U.S. bombing, or pro-Russian support for Assad is wrong.

Let me pose it as a question.

How does dropping 8,000-pound bombs or firing Tomahawk cruise missiles into the suburbs of Damascus help Syran civilians?

Syrians are already subject to some of the most barbaric aerial bombardment the world has seen in half a century. Raining down more death and destruction on their heads – even if the missiles are carrying a “message of freedom” from the West – only begets more suffering.

Furthermore, unless it is a “decapitation strike” that takes out Assad and his cronies, how does bombing civilians help the Syrian resistance? The only medium term beneficiary of an American strike (aided and abetted by French, British and Australian forces) will be Assad himself.

The narrative of a brave anti-imperialist standing up to the West (with the support of the noble Russians) will be strengthened by any American attacks.

This is why the Cliffite slogan must become the popular rallying cry of all progressives today who can understand the complexity of the Syrian situation and see through the naïve and simplistic pro-Russian line of the “Tankies”.

The civil war in Syria has become a proxy for a new (and heating up) Cold War between rival superpowers.

A pox on both sides. Long live the Syrian revolution!

This work is licensed under a Creative Commons Attribution-NonCommercial-NoDerivs 3.0 Australia License

This entry was posted on Saturday, April 14th, 2018 at 5:19 pm and is filed under Uncategorized, war on terror, war reporting. You can follow any responses to this entry through the RSS 2.0 feed. You can leave a response, or trackback from your own site.