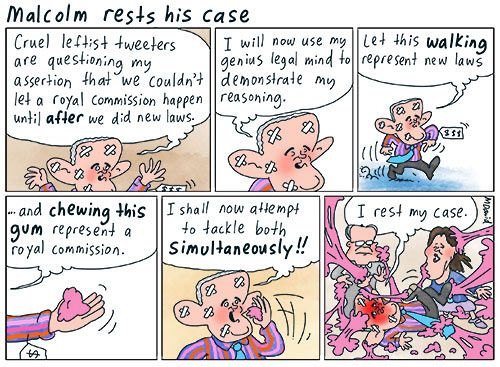 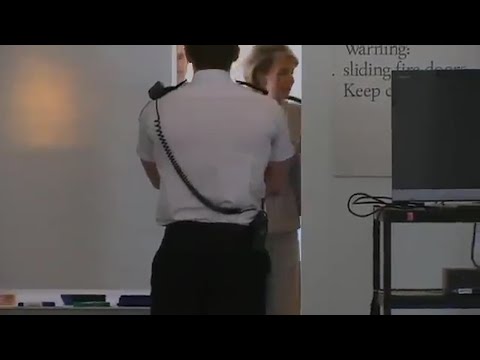 Senator Cash is notorious in Canberra for avoiding scrutiny from Press Gallery journalists. She has been caught out altering the official transcript of her rare media conferences to remove reference to uncomfortable questions and she infamously ordered Parliament House security staff to block news cameras from shooting footage of her during a particularly bad run of performances before a Senate Estimates Committee.

Earlier this year, Cash angrily responded to questions from Labor Senator Doug Cameron by threatening to “slut shame” young women working in Opposition Leader Bill Shorten’s office. She made a grudging half apology for “any offence”, but pointedly did not apologise directly to the staffers.

In the last two weeks, Cash has also been under the gun for refusing to make public a report into the workplace death of a man employed under the Work for the Dole scheme, despite a promise to do so.

Josh Park-Fing died from head injuries when he was thrown from a tractor at the Toowoomba Showgrounds. He was earning just over $200 per week when he was killed in April 2016.

At the time, Cash promised an investigation and report, but when she was handed an internal departmental report in September 2016, she did not release it as promised. In November 2017, the Royal Agricultural Society of Queensland, a project coordinator and a recruitment firm were charged with breaches of workplace safety laws over Mr Park-Fing’s death. Josh’s family and the Unemployed Workers’ Union have been calling for Work for the Dole to be scrapped. Participants in the scheme are classed as “volunteers” and are not eligible for compensation under Work Cover rules.

As the responsible Minister at the time – her portfolio was changed in the latest Turnbull reshuffle – Senator Cash has been under pressure to respond but has so far dodged giving any answers.

Cash is either terribly accident-prone and/or incompetent; either way, she is a liability to the Government and to the Prime Minister. But she is still in her ministerial role. The question is: why?

Minister for Home Affairs Peter Dutton is now the most powerful member of Malcolm Turnbull’s Cabinet. It seems he is even more powerful than the PM himself. Dutton is in charge of a recently created super-portfolio that is morphing into a local version of the U.S. Department of Homeland Security. Dutton is notorious for his hardline – we might say “extremist” – views on immigration and he has zero compunction about undermining his leader’s authority at every turn.

Dutton is prepared to lie outrageously while cynically exploiting his notoriety with weekly appearances in the “outrage” media to promote his racist and – according to some – neo-fascist ideology.

Dutton’s approach to African migrants is the only example we really need, but there are many others.

The Minister’s approach to black African migrants is to accuse them of forming violent gangs that terrorise Melbourne nightlife. There was zero evidence for his outrageous claims – made of course in the company of newly-minted shock jock Chris Kenny – but it served well as a dog whistling signal to the ignorant and the culture warriors of the right.

A few weeks later – for the benefit of Ray Hadley’s conservative audience – Dutton doubled down on his racism in an interview with The Daily “Terrorgraph”, describing white South African farmers as deserving of special consideration as refugees to Australia because of the difficult and dangerous circumstances they faced. He made another patently false statement to the effect that white farmers were being murdered in their hundreds.

His lies are repeated and amplified by the Murdoch media and sanitised by an increasingly pro-Coalition cohort of Fairfax political reporters. Even The Guardian – which Dutton despises as “leftwing” – made nice and talked him up in two puff pieces he used to directly challenge Turnbull’s leadership.

Dutton does not even hide his contempt for the PM. In the last few weeks, he has openly defied Turnbull and Foreign Minister Julie Bishop – one of his main rivals for Turnbull’s job – by revealing Cabinet discussions about immigration numbers.

Dutton is aligned with an anti-Turnbull faction inside the Government, but Fizza is too weak and dependent to move against his dark nemesis.

I’m sure you’re not really surprised that there are no “consequences” for this outrageous behaviour. After all, for a Government that loudly boasts a tough Ministerial Code of Conduct that, for instance, bans Ministers from being in a relationship with their staffers and seeks to hold all MPs and Senators to very high standards — the reality has been far from the ideal for some time.

It seems there is nothing too outrageous, no action too beyond the pale and no flagrant breach of the rules that the Prime Minister won’t defend — or at least try to cover up.

Member for Dawson George Christensen speaks on a neo-Nazi platform and the Prime Minister does nothing.

He threatens Greens’ voters with a gun and the Prime Minister does nothing.

George threatens to cross the floor in the Senate chamber more than once and Turnbull does nothing.

Julie Bishop is Australia’s Minister for Foreign Affairs, but you wouldn’t know it because she’s actually never in the office.

When former Deputy PM Barnaby “Beetrooter” Joyce was getting tied up in knots over his marital distress earlier this year, Bishop was in London at Fashion Week and the Prime Minister appointed Senator Mathias Cormann as acting PM.

When former Senator Sam Dastyari was getting booted from the Senate for accepting a few coins from a Chinese businessman, Julie Bishop was collecting a small fortune from the same guy — and the Prime Minister did nothing.

Julie Bishop was at the polo.

Julie Bishop was at the United Nations.

Funny thing is that everywhere Julie goes at taxpayers’ expense a bloke turns up and stands next to her — like, really close, like he was her boyfriend, or “partner”, or something.

And he travels at our expense too.

Who is this guy? Bishop says he’s just a friend but it looks like he might be her de facto spouse. But he can’t be because if he was, Ms Bishop would have to declare it in her register of pecuniary interests.

She hasn’t declared it — and the Prime Minister has done nothing.

Here at IA, we’ve been talking about the many problems that seem to follow Barnaby Joyce around like a bad smell – and it’s not just the cattle yards – and, finally, the rest of the news media has caught up.

Here, in no particular order, are the many potentially corrupt things that the Beetrooter should explain to the Australian public:

And the Prime Minister did nothing. Instead, Joyce only resigned in disgrace after his affair and his spending of taxpayer money on his illicit trysting was splashed on the front pages.

The hidden victims of Section 44

The Government has also been protecting at least six of its own members in relation to their citizenship status and doubts they are eligible to sit in Parliament. This story has disappeared from the front pages and appears to be in a bit of a hiatus at the moment. Turnbull said he is more than happy to refer Labor members, but has refused to list his own MPs for a High Court referral.

Then there’s also Senator Barry O‘Sullivan. He is in some s44 trouble too — but not because he’s potentially a dual citizen. The Senator has an interest in a family company that is doing contract building work on a Government-funded project in Queensland. This is potentially a breach of the rule that a sitting member cannot hold an office of profit under the Crown.

It’s difficult to imagine any of these people surviving under a Fraser-led government and even John Howard might have moved to resolve the uncertainties — but not the Fizza.

Turnbull is wedged into the Prime Minister’s job by his craven capitulation to the hard right, led by Dutton and the Abbott faction. He is not in a position of any authority over his Ministers or his backbench.

They pretty much do what they like. For example, take the crazy situation late last week where Treasurer Scott Morrison and Minister for Revenue and Financial Services Kelly O’Dwyer gave a joint press conference in an attempt to deflect criticism and claim credit for the Financial Services Royal Commission. It was a train wreck. All the pair could do when faced with questions about why they had opposed the Royal Commission for nearly two years was to make it all about Bill Shorten.

The Royal Commission itself has revealed how the Government has also been protecting the “banking mafia” for years.

The fact that the Coalition is still trying to deflect criticism into blaming the Opposition for the mess is a telling indication of just how hopeless and bereft of direction the Government is.

Turnbull has given up trying to be Prime Minister in favour of protecting his misbehaving and misfiring team.

It’s a desperate attempt to prevent catastrophic losses at the next federal election, but given Turnbull has lost a record 31 Newspolls in a row, it seems like a failing strategy from a failing leader.

This entry was posted on Friday, May 4th, 2018 at 9:20 am and is filed under #auspol, Australian Media. You can follow any responses to this entry through the RSS 2.0 feed. You can leave a response, or trackback from your own site.