Every man woman and child in New Zealand has just paid about $22.20 towards the production costs of Lord Porkpie’s The Gobbit. It’s not quite enough to give us Gold Class, but seriously: Shouldn’t we all now get a ticket to see this Warner Bros blockbuster?

After all, thanks to the Teflon Gollum we effectively sold Middle Earth for a song and a dance.

And what is the opportunity cost of handing over nearly $100 million to Hollywood moguls?

Well, one lost opportunity would be to hire 166 more teachers for ten years, or approximately the same number of nurses and radiographers.

Seriously, what’s more valuable to New Zealand: better health and education outcomes, or a handful of tourist shekels and a promotional DVD?

How can the Teflon Gollum justify the social cost of helping out Warner Bros against the future of Kiwi children?

At a time when the National government is crying poor and refusing to give pay rises to health workers and teachers where does the $100 million come from?

Effectively everyone who works on The Gobbit in New Zealand is on welfare!

We’re told the movie will create thousands of jobs and enhanced tourism opportunities, but where are the numbers? So far it’s just a hollow promise. I’ve seen one economist’s estimate that about $1.5 billion will be generated in New Zealand, but no source is given for the data [ANZ chief economist Cameron Bagrie]. And if you see the numbers below, that $1.5 seems wildly inflated to me.

Significantly, other benefits are harder to pin down:

Work by NZIER in 2002 suggested the Lord of the Rings trilogy created 800 jobs for three to four years, and brought in $300 million-plus in foreign exchange earnings annually, although polling for Tourism New Zealand found a very small percentage of tourists were motivated to visit because of the films. [Stuff.co.nz]

What we do know is that Lord Porkpie made about $10 million for the first three LOTR movies, so he’s likely to score another $5 million or so.

Other estimates place the total at well over $2 billion.

So why does Warner Bros need tax breaks anyway? The simple answer is to put more precious in the pockets of shareholders?

A further question if I may: Why are we led to believe that the budget for The Gobbit is $670 million when the total cost of the LOTR trilogy was under $300 million?

Another aspect of this is the irony of a free-market government and its libertarian partners in the ACT party helping to minimise the market risk for a multinational corporate giant.

The Teflon Gollum loves to talk up his free market and money market credentials, but he’s the first to dish out a tonne of cash in the form of corporate handouts.

Congratulations Middle Earth, you have won another bag of Piiiiie Napplumps. 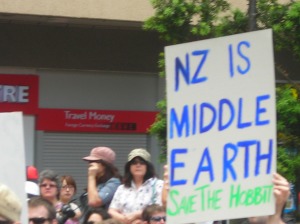 New Zealand is Middle Earth, complete with archaic employment laws, ignorant tribes of Gobbits and a semi-rural, semi-feudal social system that honours caste by birth or by wealth.

Tens of journalists turned up today to absorb and repeat Lord Porkpie’s message of anti-Australian hatred and ultra-moral national heartiness.

END_OF_DOCUMENT_TOKEN_TO_BE_REPLACED

Striking Fairfax journalists in Australia returned to work this morning and the company withdrew its lockout threat against MEAA members.

A new enterprise deal has been reached and will be voted on at union meetings this week.

Staff met this morning outside company offices around the country and walked into the building together.

Would you buy freedom of speech from these people?

An interesting story this, not that there’s anything wrong with free speech in principle. The thing here is that this reads like a News Limited press release. Oh, hang on. It’s written by Crhis Merritt, The Australian‘s Legal Affairs Editor.
Ah, now I remember, is this the same Chris Merritt who’s constantly bashing the ‘civil libertarian’ set over their support for free speech for Australia’s Muslim community and demanding that David Hicks be given a fair trial?
The same Chris Merritt who vilified and spewed hatred out at Jack Thomas and the entire Australian legal system when so-called “jihad” Jack was acquitted on terror charges because the Australian police had coerced a confession out of him.
Merritt, you are an unprincipled hypocrite, keep your bloody hands of my freedom of speech you disgusting Murdochoid.

THE nation’s top media interests put aside their differences this morning and announced the formation of a coalition aimed at persuading governments and the courts to end the erosion of free speech.

They will commission an audit of the growing restrictions on the media and recruit a chairman to lead a lobbying campaign.

The initiative was revealed at a press conference in Sydney at which the top executives of rival media companies all warned that free speech was being eroded.

News Ltd chairman and chief executive John Hartigan said that restrictions on free speech meant Australia was “a lightweight democracy” compared with countries such as Canada, New Zealand and Britain.

“Two international studies ranked Australia 35th and 39th on a world press freedom index,” Mr Hartigan said. “We should be up there with other democracies that are way in front of us.”

The campaign, which was initiated by News Ltd, publisher of The Australian, is backed by Fairfax Media, the ABC, the commercial radio and television industries, SBS, Australian Associated P ress and Sky News.

Mr Hartigan said he believed other media organisations were likely to join the free speech campaign over the next few days. He said it was not the initiative was not “a political swipe at any political party”

“To trace the degradation in our press freedoms over many recent years shows that parties of all persuasions, whether they be federal or state, have allowed this to continue,” he said.

The coalition, known as Australia’s Right to Know, says issues such as suppression orders in courts, refusal of Freedom of Information applications and terror-related laws have eaten away at press freedom.

Representatives of other media organisations were present, including the journalists union, the Media Entertainment and Arts Alliance, which outlined the scale of the problem last month in its annual press freedom report.

MEAA secretary Chris Warren said restrictions had become so severe that the public was being denied crucial information.

The main problem areas outlined by the MEAA include:

* The Freedom of Information Act has been rendered almost useless by the High Court and the federal Government.

* Terror trials are being conducted largely in secret under court orders obtained by the federal Government.

* Journalists are being threatened with imprisonment for upholding their code of ethics.

* Whistleblowers are being charged with criminal offences for revealing maladministration by the federal Government.

Mr Warren said the greatest crisis for press freedom in Australia was the attack on journalists’ confidential sources.

Herald Sun journalists Michael Harvey and Gerard McManus are awaiting sentence for contempt of court for refusing to identify a confidential source in the federal public service.

In an unrelated incident, former Customs officer Allan Kessing is awaiting sentence after being convicted of a criminal offence for leaking documents revealing flaws in airport security.

Federal attorney-general Philip Ruddock promised in 2005 to introduce shield laws to protect journalists’ sources but he was unable to secure sufficient state support at a meeting last month.

have lifted this straight from crikey, it’s an important story and an indication that rank and file journalists who are lefties and unionists need to get together as activists, not rely on the head office honchos. I must add a caveat. I know nothing of Margaretta Pos’ politics, but it is the principle of fair and open elections that is important in this case.

When is an election not an election? When it’s held by the Media, Entertainment and Arts Alliance. That’s right, the champions of a democratic society are not so keen on democracy in the ranks,

So much so, that the hierarchy has spent a staggering $10,000 to stop me becoming a federal vice-president, and Australian Financial Review journalist Mark Phillips from being one of 24 media delegates on the union’s federal council. (I am a freelance journalist based in Hobart and the immediate past Tasmania branch president).

Australian Electoral Commission ballot papers were posted on Monday this week — the same day as a leaflet was posted to 16,361 Alliance members, telling them not to vote for either of us. Our sin? We weren’t hand-picked. Meaning there are four candidates for three vice-presidents and 25 candidates for 24 delegates, which means there has to be an election rather than the semblance of one.

The leaflet was signed by Christopher Warren, as federal secretary, and Sydney Morning Herald journalist Ruth Pollard, as federal president, AJA section. It’s endorsed by 37 signatories, including the presidents or secretaries from around the country, bar Tasmania.

The leaflet states in small print that it’s paid for “by the friends and supporters of the journalism team standing for federal council”. Okay, so they paid for the leaflet. But who paid the whopping postage bill? This shady group? The Alliance?

No one contacted me to ask why I was standing or to discuss my candidacy. No one contacted Mark Phillips either. Goodness! Am I such a threat? The wicked witch from Tasmania whose broomstick must be snapped in two?

I’d heard on the grapevine there was going to be a union ticket which excluded me, so I emailed Christopher Warren last week, to ask how the decision was made and who made it. This was his response on Friday (20 April), when the leaflet he’d signed was ready for postage on Monday:

In relation to the election for federal vice-president: Ballot papers are being circulated next week. The Alliance has not — cannot — endorse any candidates. I know some officers have indicated their preference as individuals, which is their right as members of the union. However, there will be no official communication to members about any candidates beyond that circulated by the Australian Electoral Commission.