Hate Media Redux: Always was, always will be #NewsCorpse

Have you ever tuned in to Andrew Bolt’s televised hate fest on Sky News?

I personally can barely bring myself to watch even a few minutes for research purposes, let alone choose to give up precious blocks of my time to be insulted and rebuked and spat upon by Bolt and his parade of useful idiots. However, a few days ago, I did watch a few minutes of Bolt and his useful idiot du jour, One Nation leader and Senator, Pauline Hanson.

I’m sure you’ve probably seen the clip too. It’s the one where Hanson displays her idiot qualities in all of their splendid ignorance. You can watch the clip on the News.com website. But, seriously why would you choose to do that? Instead, just read this transcript, provided by the wonderful folk at Pedestrian TV.

“I’ve raised the issues of equality over the years, whether you’re an Aboriginal or a non-Aboriginal.”

“That’s not good enough because then if you make a comment about it, well what are you? Are you an Aboriginal or not an Aboriginal?”

“I think the whole lot needs to be opened up on this, a big debate on this.”

Thankfully, sensible people responded with their usual civility and good humour and actually provided a history lesson to Hanson via social media using the hashtag #defineaboriginal. For a start, the noun form is Aborigine, but Hanson’s ignorance knows no bounds.

The whole rant from Hanson started with her hare-brained comments on freedom of speech and lasted around two minutes. It was hateful and spiteful and nasty and it reminded me of this.

This is precisely the emotional effect that Bolt is trying to achieve, day in and day out. His program is no more than a collection of such two-minute noodles.

Luckily for Bolt, Pauline Hanson is easily wound-up and she’s guaranteed to voice the darkest fears that hate thrives on. Her appearance in July this year is another classic in the genre. This time Hanson is the foil for a Bolt rant about Muslims and the Human Rights Commissioner, ‘Whatshisname’. Hanson then directs the hate towards “gutless politicians” as well as the bloody Muslims.

END_OF_DOCUMENT_TOKEN_TO_BE_REPLACED

Trump’s Aussie friends are a bunch of deplorables

Given the US election result, you might be in the mood for a joke; it goes like this.

Set Up: Which one of Australia’s biggest media bullies who pretends to moral outrage at the use of profanities has just broken their own rules.

Yep, Australia’s ‘most read’ columnist calumnist, who howls like an offended snowflake when anybody swears in his presence or anywhere near him, began his column on the Trump victory with this classic line:

DONALD Trump’s win is the biggest “f— you” to all his enemies — the media, the politicians and Wall Street.

Don’t be so coy, Andrew. A f—ing 12-year-old can read those dashes. Why pretend you don’t like dropping the F-bomb?

Bolt goes on to write that the ‘whole world’ and ‘our political class’ has been given ‘a shock and a warning’.

The shock is easy to register and now it’s had time to really sink in, we can begin to process the meaning of it: Donald J Trump, billionaire and reality TV ‘star’ is the 45th President of the United States of America.

But what is this ‘warning’ that Dutchie is warning his readers about?

Stop bullying and patronising the silent majority or they will rise in terrible revolt.

It’s a pity that the worst types patronising bullies are often the last people to heed their own advice.

Like all good NewsCorpse writers, Bolt is wilfully blind to his own position in the media elite. He and they have to pretend that they are not part of the establishment, otherwise their wise words would just read like hypocrisy and cant.

END_OF_DOCUMENT_TOKEN_TO_BE_REPLACED

Hands off the ABC – Turnbull should resign his commission

#auspol The new McCarthyism is here led by Abbott and his cheerleaders like @australian @chriskkenny and fellow enemies of democracy.

The Abbott government’s political interference into public broadcasting has just got serious. 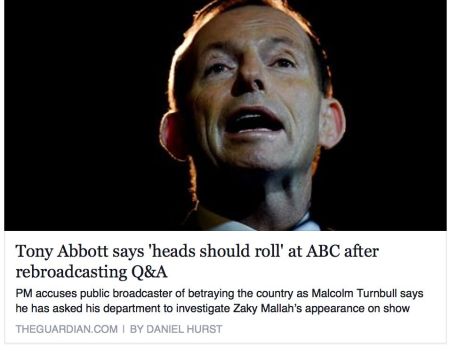 Not content with going beyond his ministerial brief and ringing Mark Scott in the middle of the night to demand answers, the Duke of Double Bay has now decided to politicise his department by demanding senior officers conduct an inquiry into the ABC’s editorial decision-making.

The ego of this merchant wanker seemingly knows no bounds.

Everybody who ever watched Play School or an ABC news bulletin should be outraged and demanding Malcolm Turnbully resign his commission.

Turnbull has breached his ministerial guidelines with this move, but he’s gloating about it.

The jumped-up, smug little Napoleon has gone well beyond what is acceptable in a system that relies on the separation of powers.

How else can you explain his “instruction” to his department — which we can presume knows little to nothing of news judgment and editorial decision-making.

Turnbully’s instruction: fuck-up the ABC, but make it look like an accident

And the reason he thinks he can get away with it is that he did the last time.

END_OF_DOCUMENT_TOKEN_TO_BE_REPLACED

This week one of the biggest political stories of the year has broken, but The Weekend Australian has buried it on page 9.

This is not even original reporting. It’s a cobbled together story based on cribbing quotes from other news outlets.

It’s only in the paper because the editors know that if The Weekend Australian ignored it completely, its credibility would suffer even more.

It is an astounding example of skewed editorial judgement.

Because, the story is highly damaging to the Abbott government and the News Corp leadership has firmly nailed its flag to the mast of what is more and more looking like a pirate ship of fools.

The framing of the story — carried in the headline and lead par — set the tone: The Weekend Australian is right behind Abbott on his denials.

Denialist–in-chief, Chris Kenny is leading the head-in-sand brigade on this issue.

LOL – the dudes who’ve got this wrong for a decade are now the experts on border control https://t.co/ngcycfyqgQ

Now the paper is scrambling to regain some initiative on this story, but the reporting still won’t directly accuse anyone of anything, instead promoting the continuing obfuscation, denials and no comments from senior members of the government.

However, this story is not going to die off any time soon. Indonesian officials are saying they’ve seen the wads of cash in $US bills and the people smuggler allegedly at the centre of the pay-to-return deal has been located and named.

Now the United Nations is weighing in. It is a story will a long way to run yet.

Watch this space, but don’t rely on The Australian for the facts.

[I will have more to report on this story soon, right now it’s Sunday and I’m going out for lunch]

The last of the old school moguls: Is Rupert on the way out?

The leaked announcement this week that Rupert Murdoch is to “relinquish” his 60-year reign at the top of the News Corporation mountain has been met with some skepticism by media insiders.

It seems that Rupert is to give up executive control of the Twenty-First Century Fox entity and hand it over to his son James.

@rupertmurdoch you’re being very quiet today Rupert, nothing to say on the succession leak on Fox or the slumping share price for company?

Many, like Crikey correspondent, Stephen Mayne, feel that Murdoch’s move is a feint , which, in reality, will cement his family’s hold on the lucrative cross-media business. Mayne wrote that the Murdoch is the master of ruse when it comes to managing his family’s controlling interest in the News businesses.

…the Murdochs have made a career out of gaming media laws and bending regulators to extend their two-decade run as the world’s most powerful family.

Today’s leak to Fox News is just another step along the way in that journey for a family that is now worth about $15 billion, and carrying very little risk through either public or private debt.

Writing on The Conversation, Brian McNair describes the succession leak as a “Game of Thrones” moment for News Corp.

And what of the future for news and journalism at News Corp? One imagines that if James and Lachlan do succeed their father, they would bring to the roles his personal commitment to investment in journalism, and a readiness to lose money in an activity with overreaching political value, here in Australia not least.

On the other hand, when Rupert does eventually depart for the great newsroom in the sky, will more mundane corporate realities come to the fore, spelling trouble for the loss-making Australian, The Times in the UK, and other outlets?

To further complicate matters of ownership and financial regulation of News Corp, in 2013 the company was split into two wings; one—21st Century Fox—controlling film and television assets, mainly in the United States, the other—News Corp—a global network of newspapers and a publishing house (Rushe 2013). But in Australia, News Corp will hold both newspaper assets and Foxtel/Sky which is likely because of the huge losses suffered by the Australian newspaper, which could be as much as $33 million a year according to Murdoch watcher, Neil Chenoweth.
But maybe, just maybe Rupert’s time has come.
Take a look at this recent fairly bizarre tweet. We all make mistakes, but for someone who for 60 years has been a proud journalist (in his own mind at least), surely this is a gaffe too far.

HillaryNo Surely smart enough to know she was talking nonsense at yesterday's yesterday.