Will the last candidate standing please vote for someone else

I’ve been consciously participating in Australian politics since I first voted in 1974 and I can’t recall any campaign period that’s been more shambolic than this one.

Already, fourteen (yes, 14) candidates have been disendorsed by their parties and one, the bankrupt former One Nation senator, Rod Culleton, has been referred to police over his ineligibility to stand.

Most have been struck down since nominations closed a week ago, so they’ll still be on the ballot paper.

What an omnishambles wrapped in a clusterf*ck and dipped in glitter-infused turds!

I don’t think even 1975 came close to being this bad and that was a bitter campaign on both sides that eventually saw Malcolm Fraser elected and Whitlam vanquished.

The Murdoch press played a role then in demonising the ALP and helping Fraser win. The Murdoch papers and Sky News are playing a similar role today – as they have in almost every election since the late 1960s – this time, though, their preferred Prime Minister is looking like a cooked goose.

END_OF_DOCUMENT_TOKEN_TO_BE_REPLACED

As a rule, I don’t mind election campaigns but this one already feels like stale pizza sitting in the bottom of the fridge. I’m hungry, but I really don’t want to eat it.

So, we got through the first couple of the of five election campaign weeks relatively unscathed. Good Friday provided a respite day even though we still got footage of a smirking Prime Minister bothering God and small children.

Bill Shorten went to Luna Park in Melbourne, an apt metaphor for the swings and round-abouts of campaigning and the roller-coaster ride of chaos that has characterised federal politics over the last four years. 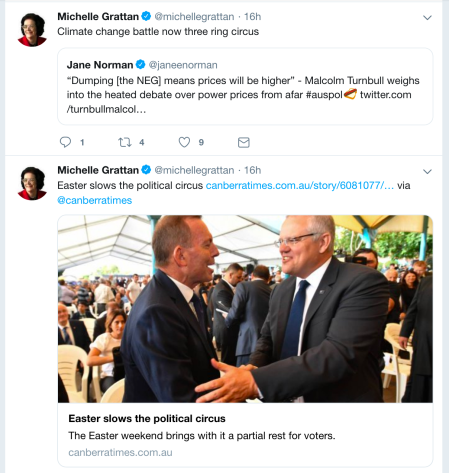 The ‘circus’ analogy gets over-used, but if it’s OK for Michelle Grattan to double-down on it, who am I to be picky.

We may have had a short break from the campaign over Easter, but are we any closer to having a clear front-runner for the only poll that counts on 18 May?

Well, I thought it was pretty clear from the last gazillion Newspoll results that the ALP was going to win the election in a canter.

However, Michelle Grattan (no, I’m not picking on her) reckons it was a “scratchy” first week for Shorten because of a small gaffe on superannuation and because he’s “vulnerable” on Labor’s ambitious carbon emission reduction policies.

Well, I’m Okay with that because at least the ALP has some policies to quibble about. The Liberals, on the other hand, are in such confusion they don’t even know what their own policies are – like on electric cars, for example.

But some scribes even reckon Morrison is somehow making a comeback.

That’s like saying a man on life-support in a palliative care ward is going to make a full recovery.

I’m really not sure how they reach such fanciful conclusions.

Ah well, I suppose anything is possible inside the Canberra “bubble”.

So how is Morrison going to stage this political miracle?

Well he is, after all,  Scott the “disruptor” according the Katharine Murphy writing in The Guardian:

Scott Morrison’s strategy is to run over the top of the trench firing bullets every which way, in an effort to disrupt Shorten’s rhythm.

Morrison has no choice but to act like a demented and stupid-brave World War One sapper high on the fumes of battle. There is nothing else there.

The Liberal Party has been totally devoid of ideas, imagination, initiative and innovation ever since Peta Credlin and Tony Abbott were running the country after trashing the joint in the 2013 election.

Turnbull had nothing in 2016 and only just hung on because Labor started from a long way behind after the Rudd-Gillard-Rudd omnishambles and the deceitful ‘carbon tax’ campaigning masterminded by the discredited Credlin.

Three years later and Morrison has had a chance to prove to the Australian public that he’s an empty vessel. Well, not exactly empty, he’s actually full to overflowing with bombastic populism, smug ego and meaningless fury.

Let’s take the electric cars policy as an example.

The COALition began the campaign bagging Labor’s pledge to have 50 per cent of all new car sales converted to electric vehicles by 2030. That’s a whopping decade away and its only half of the average 1.1 million new cars sold each year, according to industry figures.

So that’s 500,000 electric vehicles added to the national fleet, on average from 2030 onwards.

It is an ambitious policy given that there are less than 10,000 electric vehicles currently on Australian roads, including about 4000 Tesla models. This is about 0.3 per cent of the total number of cars on the road.

So, it seems that the Liberals might have been right to poke holes in Labor’s policy. The only problem was, the COALition had an almost identical policy on the books.

Morrison and his ministerial colleagues looked stupid when they were warning Australian petrol-heads that Bill Shorten was coming for their petrol utes and big-engined cars, in a bid to wreck their enjoyment of the traditional Aussie weekend pursuits, like boat and caravan towing and driving illegally off the beaten track through national parks.

Morrison looked stupid, but then Peter Dutton and Angus Taylor stepped up and gave Scotty their beers.

Peter Dutton is on a knife-edge margin in his Queensland electorate of Dickson, so he made the excellent decision to attack his Labor opponent for not living in the electorate.

Fair enough, if you conveniently forget that Dutton owns several luxurious multi-million dollar properties outside of Dickson himself.

But the attack focused on Ali France’s disability. She has a prosthetic leg because of a horrific car accident. She lives close to Dickson in a home she spent over $100,000 on to modify in order to make it convenient for her.

So what did Dutton do? Well, he’s well-known for his sensitivity to less-fortunate people and promised us when challenging Turnbull that we would see more of his engaging human side.

Peter Dutton targets Labor’s candidate, accusing amputee Ali France of using her disability “as an excuse’’ for not moving into the seat. https://t.co/2mnYT8FGnJ

I guess we should also not be surprised that this story was first run in The Australian. The Murdoch media is going all out to help the coalition.

Senior kool-aid dispenser Piers Akerman was photographed out on a door-knocking campaign walk with Tony Abbott in Warringah. He looked really happy to be there just standing “in the background”, but the candid snap confirmed what we have been saying all along.

The Liberal Party is a subsidiary of NewsCorpse.

News Corp columnist Piers Akerman, in Tony Abbott tee shirt, campaigning for Abbott in pic tweeted by Abbott but now deleted. Not even pretending they’re balanced now are they? pic.twitter.com/aNPrqpu6m9

And what about poor old Angus Taylor. Taylor is the Energy Minister in Morrison’s government and he has previous form as a nasty, spiteful dickhead. He was famously sacked by British Tory knob, Boris Johnson, while he was mayor of London.

In that instance Taylor was accused of making insensitive racist comments. He’s right at home in the modern Liberal Party where he has languished for the last five years.

Taylor must have been thinking that the Liberal campaign could do with a boost in the past week, so he thought it the right time to grab the headlines with a poorly-timed and ill-conceived threat of legal action against two independent journalists over their retweet of a now infamous Twitter thread on the minister’s involvement in the snowballing water scandal that brewing away nicely in the background.

There is no better way to draw the spotlight onto yourself and your possibly dodgy dealings than issuing threatening legal letters to journalists who don’t have a lot to lose.

Given Mr Taylor’s propensity to launch his lawyers at anyone suggesting he acted with impropriety we are making no comment on the water sales issue, but we can’t help but think that firing off a defamation threat in the middle of an election campaign is a distraction Scott Morrison could do without.

As an aside, we can note that the other senior COALition figure allegedly in the centre of the water sales scandal is the delightful family man and member for New England, Barnaby Joyce.

Question for Barnaby and Angus. Who owns the other 90pc of the shares in the Caymans entity which benefitted from the sale of Aus water rights? #Watergate https://t.co/1Wpt7KLuMU

It’s a short week this week with the Easter Monday and ANZAC Day holidays. Both Morrison and Shorten have said they won’t officially campaign on those two days, but we can be sure that their faces will grace the nightly news and dominate the front pages because it’s much easier for the journalists to just follow the leaders than attempt to cover actual policies.

Burn of the campaign – so far

The false war over electric cars made for some interesting door stops and prompted several car manufacturers to publicly critique the COALition’s scare-mongering.

My favourite burn moment of the campaign so far has been the start of a television advertising campaign for the global launch of the all-electric Hyundai Kona, a compact SUV that will retail for around $37,500.

This is an affordable and smart-looking option for people wanting to go into the EV market.

It may not be deliberate, but the Hyundai advert feels like a giant FU to the Liberals this week.

It’s quite funny to think that the COALition might get run down by a fleet of electric cars.