The ABC still has friends

A LONG-SERVING ABC staffer has told IA that the “clock is ticking” on Michelle Guthrie’s “honeymoon period” as managing director of the ABC.

Speaking on the condition of anonymity, the senior producer says that “rogue managers” have “tasted blood” and “enjoy” the process of making people redundant. Our source also believes that the ratio of production staff to managers has been skewed and that the decision to axe up to nine producers from the science program Catalyst is a “tragedy”.

Under these conditions, our source believes, the ABC will be unable to deliver the promised 17 one-hour science specials under the revamped format.

Many people are concerned about the future of the ABC under a Turnbull-led Coalition government and, now that a former Murdoch executive has taken the reins as managing director, there is disquiet both inside and outside Aunty at the direction the national broadcaster is now taking.

Over the past week, IA has contacted nearly a dozen current ABC staff. They are reluctant to comment on the record as those still at the broadcaster are fearful that being outspoken will cost them their jobs. This alone is a sign of the “chilling effect” of the managerial style adopted inside the ABC. Our source says that production staff find the situation “stressful” as they busily upskill to meet the challenge of digital disruption.

“The whole place gets the need for change,” IA’s mole reveals, “it’s the management who are the Luddites.”

According to a report in The Guardian this week, ABC staff have been warned not to speak out and not to adopt a “defensive mindset” about the changes that continue to come:

‘Staff were angered by an earlier warning from the ABC Radio director, Michael Mason, who told them they had to accept change because “a defensive mindset and a belief that the ABC will flourish regardless of the industry and competition will not work”’.

Read the rest of this story at Independent Australia

Can cuddling up with the commercial media save the ABC from Abbott’s axe?

For fans of publicly funded broadcasting in Australia, Mark Scott’s speech to the American Chamber of Commerce in Australia last week had some good news elements, but is it enough to save the ABC?

According to Scott, the ABC is the nation’s most trusted institution; most of us are consuming ABC products and we like it a lot, despite its critics and naysayers.

However, for Friends of the ABC (FABC), Scott’s speech sent mixed signals about the national broadcaster’s future.

The Victorian spokesperson for FABC, Glenys Stradijot is “disappointed” that Scott appears to make an argument for the ABC in “purely commercial terms”, rather than emphasising the benefits of having a “truly independent” public broadcaster. It seems to “erode the very reason that the ABC exists” she says. 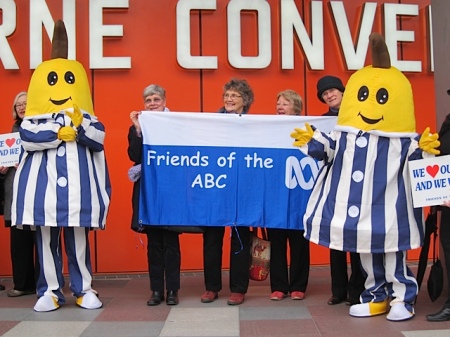 Friends of the ABC picket the Victorian Liberal Party convention in May 2013 where a motion to privatise the ABC was due to be debated. The motion was not voted on after intervention by Tony #Abbocolypse Abbott