Hate Media Redux: Always was, always will be #NewsCorpse 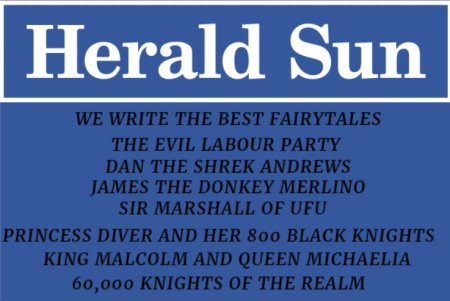 Have you ever tuned in to Andrew Bolt’s televised hate fest on Sky News?

I personally can barely bring myself to watch even a few minutes for research purposes, let alone choose to give up precious blocks of my time to be insulted and rebuked and spat upon by Bolt and his parade of useful idiots. However, a few days ago, I did watch a few minutes of Bolt and his useful idiot du jour, One Nation leader and Senator, Pauline Hanson.

I’m sure you’ve probably seen the clip too. It’s the one where Hanson displays her idiot qualities in all of their splendid ignorance. You can watch the clip on the News.com website. But, seriously why would you choose to do that? Instead, just read this transcript, provided by the wonderful folk at Pedestrian TV.

“I’ve raised the issues of equality over the years, whether you’re an Aboriginal or a non-Aboriginal.”

“That’s not good enough because then if you make a comment about it, well what are you? Are you an Aboriginal or not an Aboriginal?”

“I think the whole lot needs to be opened up on this, a big debate on this.”

Thankfully, sensible people responded with their usual civility and good humour and actually provided a history lesson to Hanson via social media using the hashtag #defineaboriginal. For a start, the noun form is Aborigine, but Hanson’s ignorance knows no bounds.

The whole rant from Hanson started with her hare-brained comments on freedom of speech and lasted around two minutes. It was hateful and spiteful and nasty and it reminded me of this.

This is precisely the emotional effect that Bolt is trying to achieve, day in and day out. His program is no more than a collection of such two-minute noodles.

Luckily for Bolt, Pauline Hanson is easily wound-up and she’s guaranteed to voice the darkest fears that hate thrives on. Her appearance in July this year is another classic in the genre. This time Hanson is the foil for a Bolt rant about Muslims and the Human Rights Commissioner, ‘Whatshisname’. Hanson then directs the hate towards “gutless politicians” as well as the bloody Muslims.

END_OF_DOCUMENT_TOKEN_TO_BE_REPLACED

In a rambling and almost pointless column in The Australian on 2 November: THE MIND CODDLES, ultra-conservative Murdoch calumnist Janet Albrechtsen lamented the rise of so-called ‘political correctness’ on American university campuses and she cited an increase in administrative attempts to impose ‘trigger warnings’ on the content of some course materials to prove her point.

Albrechtsen tapped into the NewsCorpse hive mind in preparing this article. In the first instance, she borrowed the idea from an October 10th column by the Herald Sun’s Rita Panahi, whose intemperate language and abusive tone goes unchecked by her editors. Albrechtsen also returned to the ‘yoga pants man’ imbroglio that we discussed in last week’s Media Sauce.

Then, a few days after the Albrechtsen column, ‘emeritus’ (simply means unpaid) Professor John Carroll returned to the theme in an opinion piece about the evils of Section 18C of the Human Rights Act: ‘Anguish is exquisite for wielders of 18C’.

I’ve already been down the 18C rabbit hole and will go there again later this week, but for now I want to introduce you to the News Corp methods of groupthink and pushing inconvenient facts down the memory hole.

Groupthink is easy; it is represented clearly in the way that News Corp editorial and political lines are set at a high level and then all news and opinion reproduces the lines day after day. The current and increasingly vicious campaign against the Human Rights Commission and Section 18C of the anti-discrimination legislation is a paradigm example. I have written extensively on this phenomenon over on my blog, Ethical Martini. The simple point about the memory hole is that it permits the perpetrators of groupthink to deny that they do it, through the simple act of forgetting.

END_OF_DOCUMENT_TOKEN_TO_BE_REPLACED

Black and white and Reds all over: My last 2014 post about The Australian

It must be some sort of ignorant bliss to be a columnist or leader writer with The Australian and to live in the certain knowledge that Chris Mitchell’shair is always right about everything.

Not having to think abstractly or go outside the rectangular box of its pages to find something as subtle as flux, contradiction and 50 shades of grey must make for an easy life of absolutes without the worrying niggles of nuance and self-doubt. 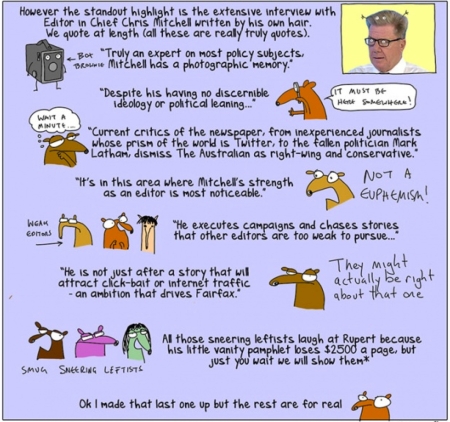 END_OF_DOCUMENT_TOKEN_TO_BE_REPLACED

My occassional correspondent,  J W Eekes Esq. sent this missive as a comment on the Henrygate thread. It speaks to the heart of the debate about “Kiwi-ness” with a vigor born of class-consciousness. I thought it well worth elevating.

Many thanks sir. Please regale us with more of your pithy observations.

The problem of the Governor-General

The real problem with the Governor-General isn’t his size or ethnicity. The problem is his membership in the self-serving, bipartisan cohort of judges and lawyers who consider themselves born to rule this country and have done so for decades.

Ruling classes throughout the Anglosphere co-opt whoever and whatever they can to legitimise their hold on power and give the impression of inclusiveness in what is in fact always an elite club governed by inviolable customs and shibboleths.

Satyanand’s ethnicity might be a problem for Henry and his supporters. It’s not for the establishment who long ago accepted him and elevated him to office. What matters to them is membership in the ruling class of our very own good ol’ boys and gals. If anything, Satyanand’s South Asian origin served to make him Helen Clark’s top choice even though it aroused suspicions of tokenism.

The only genius of the ruling class is its ability to pay lip service to lofty terms like meritocracy and public service, while exploiting the vast majority of people and convincing them that jandals, Richie McCaw and the quarter-acre section mean Godzone is something more than a lame concept invented by repressed depressives who clearly never lived or visited anywhere else.

END_OF_DOCUMENT_TOKEN_TO_BE_REPLACED

Eric Blair – 50 y.o. Latino moderate – genius, but not to be trusted

So, I finally got a face up on Facestat. As I mentioned previously, I decided to only experiment on dead friends, or in this case, someone I’ve never met, but always admired.

What do the raters and haters of Facestat think of Eric Blair?

So far, about an hour in [and past my bed time], not much. 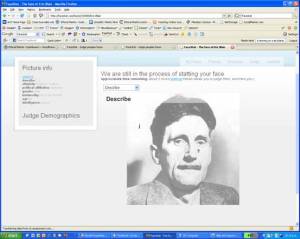 ethnicity: Hispanic / Latino
political affiliation: moderate
gender: male
trustworthy: not to be trusted
age:50
intelligence: genius
I guess you could argue they got it half right at this point. Eric Blair is male, he was 49 when he died tragically of tuberculosis and he was a genius.
Facestat – evil is as evil does
Does my face look fat in that?
OK, so I had a little bit of fun.