I wrote briefly the other day about the life of a grey collar intellectual and how it is measured in terms of research outputs in a Taylorist way.

My friend Peter sent me a link to this strange little text-to-movie piece that explores what would happen to Karl Marx today in higher education.
Welcome to the Department of Omnishambles in the Faculty of Inhumanities.

The Department of Omnishambles. Click image to load video and hear Karl’s review

When the ruling class feels strong and the political leadership of the labour movement is corrupt to the core, a political paralysis descends on the parliamentary wing of the working class intelligentsia.
The constant chattering about the so-called “chattering classes” deafens us to the hardline surge now underway in Australian public life.

One of the worst offenders is the new enfante terrible in the Murdoch stable – imported stable bully-boy Brendan O’Neill. He is a serial offender when it comes to to trash-mouthing the so-called chattering classes. In harness with the dreadful Bolter, O’Neill is gung-ho for intellectual-bashing, public sector trashing, culture wars scorched-earth pollicy-wielding plonker.

O’Neill is even described as an “ex-Trotskyist” on The Australian’s website. Fuck-that-for-a-fucking-joke. The Murdoch mandarins love to dress up their tame spouters as ex-lefities. It plays to their prejudice and their perceived audience. It also silences any idea that the op-ed pages are not Foxified – that is “fair and balanced”. 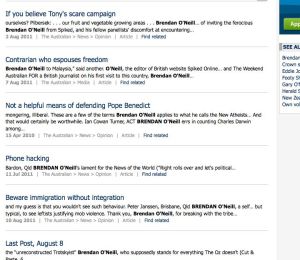