Postmodernism and the Bonaventure Hotel

I’ve just stayed for two nights in the Westin-branded Bonaventure hotel in downtown Los Angeles. I was keen to stay there and explore the hotel because it’s something of an icon in architecture and also a building that evokes strong reactions in people.

Some of the hotel’s history is recorded at Wikipedia. The Bonaventure is a bit of a star in the city of stars. It has appeared in loads of movies and TV series since construction was finished in 1976.

I was fascinated by this hotel because it features in the work of Marxist cultural theorist Fredric Jameson and has been something of a touchstone for postmodern cultural theorists ever since, such as Jason Berger, who re-examined some of Jameson’s argument that the cultural logic of postmodernism reinforces the hold of capitalism on the popular consciousness:

Using a reinterpretation of Jameson’s own work, I will argue that his analysis of the hyperspace within the Bonaventure Hotel in his original 1988 essay provides evidence that postmodernism does create a resistance to late capitalism through spatial “deterritorialization.”[Berger 2004]

I’ve never really agreed with this idea. To me postmodernism is a capitulation to capitalist relations of production and a celebration of crass, kitsche consumerism as the new revolution.

So is the Bonaventure a celebration of capitalism, or does the building condemn consumerism?

END_OF_DOCUMENT_TOKEN_TO_BE_REPLACED

So Sunday’s been and gone on your side of the dateline. Here it’s nearly 11pm.

I went out to Hollywood on the Metro this afternoon. What a disappointment. Not sure what I was looking for, but it was pretty ordinary. I got off the train at Hollywood and Vine (what a romantic spot), but it was dirty, rundown and full of cheap suits. 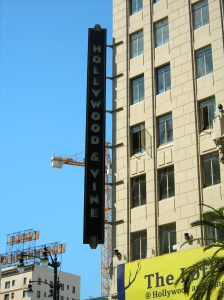 The famous Hollywood and Vine corner - cheap suit anyone?

You know for $US 49.95 you can buy a suit and then get your photo taken next to one of those stars in the pavement – the “walk of fame” or some such.

I’m enjoying the Bonaventure hotel, but haven’t yet made my mind up about it’s postmodern credentials. (More on that later).

But the Martinis are supersized, and they come with sides.  This one was at least a double and it had some tapas on a plate and a glass of water. 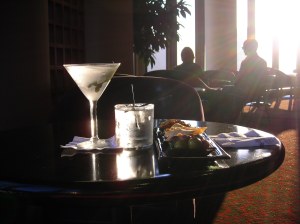