A chilling story in today’s New Zealand Herald, that suggests the national broadcaster has got its news priorities all arse-about.
John Drinnan reports that Prime Minister John Key was bumped from Tuesday’s Close Up programme in favour of an extended interview with former All Black star lock Robin Brooke.

Nothing newsy in that you might think, producers often have to make last minute changes to the line up of current affairs shows to accommodate breaking stories. On any ‘normal’ day such things would go unnoticed.

But this case is a bit different. The PM had just delivered a state-of-the-nation address to the opening of Parliament for 2010 and in his speech had outlined some swingeing changes to New Zealand’s tax system.

One of the changes – alongside reducing the tax burden on the super-rich – was an increase in the GST that would impact heavily on low income earners. Raising the GST from 12.5 to 15 per cent would lift the price of all the basics that most low income households spend the bulk of their hard-earned cash on.

This was a significant story of national interest and we might have expected Close Up host Mark Sainsbury to put Key under some hot lights for a grilling.

Sorry, who am I kidding. Let me rephrase that:

We might have expected Close Up host Mark Sainsbury to invite Key into the studio for a friendly chat – rehearsed in jolly tones – about his great and glorious, nay, visionary, tax proposals to help New Zealand’s struggling millionaires in their honourable quest to catch up with their well-off Aussie cousins.

Instead we got a five week old story about Robin Brooke’s drunken groping of a teenager and his threat to bash the 15-year-old girl’s gallant protector – himself a tough and seasoned 17.

Brooke was cajoled into giving a heart-felt (at least that’s what he told Sainsbury) apology. All of that took an excruciating (for Brooke and for the audience)  17 minutes and 56 seconds.

I get that Brooke was something of a Kiwi hero ‘back in the day’. But this story is titillation and tabloid celebrity tittle-tattle. The tax changes, on the other hand, affect every New Zealander and have some potentially huge political spin-offs for National’s relationship with the Maori party.

What were they thinking?

In Drinnan’s piece, a TVNZ  spokesmouth is quoted as saying that Close Up has a “preliminary booking” to speak with John Key on Budget night – that’s a whole three months away. But there’s no guarantee that this booking will be honoured. Suppose another ex-All Black does something stupid and wants to revarnish his reputation with a soft appearance on Close UP and Personal. Key will be left in the wings again.

No doubt the PM’s minders are not too worried about this. The less scrutiny of National’s robber baron tax policies, the better. Besides, three months is a long time in politics and Key doesn’t have to worry about getting a nasty chin rash from getting too Close Up and Personal with Mark Sainsbury’s feral facial hair.

Alongside rumours that John Campbell’s only got a handful of months to run on his contract and that Campbell Live is going to be dumped in favour of the atrocious @7, this is another nail in the coffin of New Zealand current affairs television.

A source at TVNZ has written to note that the Herald‘s occupation of the moral high ground on this issue might in fact be them standing on a pile of the proverbial. My acquaintance sent this image as the proof of the pudding. 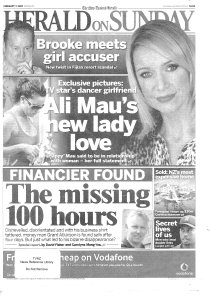 Should this pot call the kettle black?