OK, so can you tell me what’s wrong with this picture? 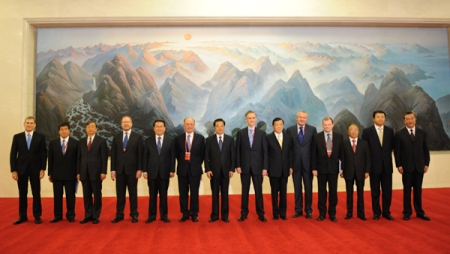 Chinese President Hu Jintao (7th L) poses for a group photo with co-chairpersons of the World Media Summit prior to the summit's opening ceremony at the Great Hall of the People in Beijing, capital of China, on Oct. 9, 2009. The two-day summit, hosted by Xinhua News Agency, opened here Friday morning. (Xinhua/Li Xueren)

Talk about a nightmare featuring Men In Black. This comes pretty close.

The World Media Summit was held in Beijing from 9-11 October 2009 and brought together the leaders of 170 global news media companies to discuss the opportunities and challenges facing the news industry in the age of News 2.0.

A number of important speeches were given by eminent people and a long-winded weasel-word statement was issued at the close of the summit.

It’s remarkable for the lack of irony, but the statement called for the news media to be a conduit for “world peace”. Yes, if this sounds like some lame beauty pageant, that’s exactly what it was, viz:

We hope that media organizations around the world will provide accurate, objective, impartial and fair coverage of the world’s news events, and promote transparency and accountability of governments and public institutions, and thus facilitate the mutual understanding as well as exchange of views and ideas among peoples from different countries and regions.

A fine sentiment, particularly given the summit was hosted by the Chinese regime and the keynote address was given by that well-known democrat and champion of media freedom Hu Jintao.