World War 3 – will it start over North Korea?

Since the arrival of Donald Trump in the White House the world appears to be moving closer to a catastrophic military conflict that threatens nuclear Armageddon. In this first in a series, political editor Dr Martin Hirst assesses the possibility that we’re already fighting World War Three.

‘The fear of war hangs over society. This is almost literally true, for it is not the invader in the streets but the warhead exploding on us which dominates our nightmares.’ 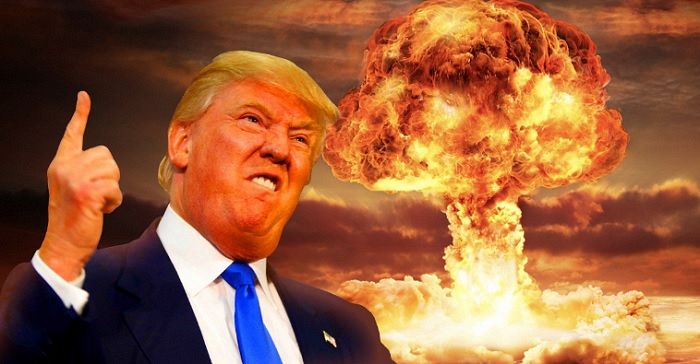 THIS IS A SERIES that looks at global flashpoints and their potential to blast the world into a nuclear nightmare. It was once unthinkable that strategic nuclear weapons might be used in a world-wide war, but now we need to start thinking it is more likely than not.

And just this month, Donald J Trump caused the “Mother of all bombs” to be dropped in Afghanistan to explode over… we may never know what exactly.

Are we already inside World War Three?

In this series, I will look at Asia, the Middle East and Europe as places where potential nuclear trigger points might occur and then, on a brighter note, I’ll offer some suggestions about how we might stop it.

Let’s begin on our own doorstep.

We are not neutral

We are not neutral and we never have been. Australia is a willing and active partner in many of today’s global conflicts. Despite contrary propaganda, this does not make us safer, it increases the risk that we will be a target too.

Pine Gap makes us a target for Chinese and possibly North Korean and Russian nukes. I’m more worried about China and Russia because they both have nuclear-capable submarines that can reach us almost undetected.

When 1,250 US marines flew into Darwin this week, the NewsCorpse rag that dominates Northern Territory journalism, the NT News, could hardly contain its jingoistic excitement, declaring on page one that they are “ready to fight” against “our” common enemies.

We should be under no illusion or misapprehension about their intent:

Lieut. Colonel Middleton said when US Marines were in forward deployment they were ready for battle.

“I think that the commitment that we’ve taken to put a task force here with a conversation to get larger over the years says that we do think this is an important region,” Lieut. Colonel Middleton said.

When asked about the North Korea stand-off he said: “We stand ready to fight.”

I can only hope that this made the good souls of Darwin feel a lot safer, knowing that they are potentially within range of North Korean rockets.

We all have “potential”

It’s important to focus on this word “potentially”, because it is a crucial qualifier.

Our foreign minister, Julie Bishop, has used the threat of a DPRK nuclear strike on Australia as one reason for enthusiastically welcoming over 1,000 marines to northern Australia, but the threat is not imminent, or even realistic today.

Weapons experts agree that North Korea is at least four years away from developing a ballistic missile capable of a) carrying a nuclear warhead and b) travelling as far as Australia without blowing up mid-flight.

Speaking on the ABC’s AM program earlier this week Bishop was keen to talk up the North Korean “threat”.

“[North Korea] is on a path to achieving nuclear weapons capability and we believe Kim Jong-un has a clear ambition to develop an intercontinental ballistic missile capable of carrying a nuclear payload as far as the US.”

But what Bishop ignores here – and she hopes you will too – is that while North Korea’s nuclear threat is only “potential”, the United States has a proven nuclear capability and a proven propensity to use atomic weapons.

Not only that, hawkish American analysts are now insisting that the U.S. must strike first and this first strike should happen sooner rather than later.

…the United States must plan to destroy North Korea’s nuclear and long-range missile sites sometime in the next several years — and perhaps within the next two.

At the same time, it must be expected that the American action would trigger the North Korean military to instinctively launch a full-scale retaliatory strike against the Republic of Korea (ROK) along the armistice line of the Demilitarized Zone (DMZ), whether or not Mr. Kim remains alive. With that as a given, the United States must prevent such an event by launching, simultaneously with the initial attack on the North Korean nuclear and ICBM facilities, a full-scale offensive against the North’s positions along the DMZ. There can be no delay in this U.S.-ROK offense, for it is essential to preclude North Korea’s own counteroffensive against the South.

This is a clear statement of aggression from the American side.

The argument for a pre-emptive strike against North Korea is that its patron-state, China, is incapable of stopping Pyongyang through purely diplomatic efforts.

So is China an ally or an enemy?

This piece first published on Independent Australia as Are we already fighting World War 3?