Can Labor win? It ain’t gonna be easy, but it ain’t impossible either

For the last few days I’ve been allowing myself to think that Bill Shorten can actually beat the Fizza on July 2nd.

I know it’s going to be tough. The odds are not necessarily in Bill’s favour and we cannot underplay the significance of an all out News Corpse attack on Labor over the next few weeks. We saw how successful this was in 2010 and 2013 and Murdoch’s hacks will pull out all stops to see Shorten defeated.

However, despite the obstacles, we could actually have a Labor government in the second half of 2016.

The math is not impossible, but it might take a few miracles. 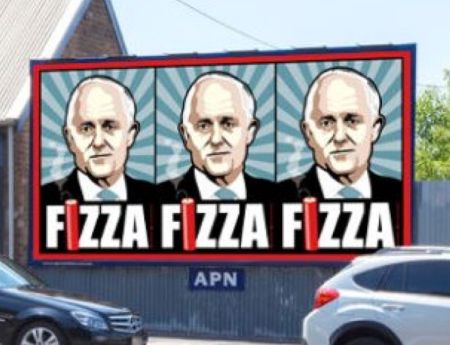 The Fizza hits the streets

In a way perhaps I’m just channeling the late Bob Ellis. He predicted a Shorten victory way back in December last year. At the time I was wishing, but not hopeful, but now I am convinced Turnbull cannot win on 2 July.

A few handfuls of votes is all it takes

To be honest, the prospect of beating Malcolm and his fizzas comes down to a few handfuls of votes in some key swing seats. Labor has to take back 17 seats and this requires a swing of around 4 per cent or a bit more. It’s not impossible for this to happen.

When you break it down like this even a seat like Lyons in Tasmania is winnable for Labor if around 800 electors change their vote from the coalition to Labor on a two-party preferred basis.

Lyons is an interesting example because according to the ABC’s swingometer, a swing of just 1.4 per cent to Labor would mean they win this seat. At 1.4 per cent Labor would also win Capricornia and Petrie in Queensland.

A gain of 2.7 per cent in Braddon would give Labor its second Tasmanian seat. Only 2.8 per cent and the NSW seat of Banks returns to Labor.

Take the swing to an even three per cent and Labor wins nine seats including the bellwether of Eden-Monaro in NSW. Add just 0.3 per cent to that and the seats of Robertson and Page (NSW) and Deakin (Victoria) return to Labor. At 3.4 per cent Labor gains Macarthur and Reid in NSW.

Macarthur would be the first seat to change hands in 2016 that was not held by Labor before the last election. In other words, it would be a loss for Turnbull, not a seat regained by the ALP. Significantly, a uniform swing of 3.4 per cent to Labor would result in a nearly hung Parliament.

Labor would have 71 seats, the coalition 75 and four would be in the hands of independents. It is at this point that the 2016 election becomes very interesting.

A swing of 3.7 per cent would give Labor its second steal from the Coalition, delivering Bonner (Qld). It is worth noting that this would require about 4000 people to switch their votes from 2013.

Three-point-eight per cent could be Shorten’s magic number in 2016. with a swing of this magnitude the ALP would win Gilmore from the coalition. At this point, Labor and the coalition would each have 73 seats and the balance of power would be squarely with the independents and Greens.

A four per cent swing and the ALP wins Corangamite in Victoria and can form government in its own right with a comfortable two seat majority.

With a swing of 4.1 per cent it is all over for the coalition. The ALP picks up Bass (its 3rd gain in Tasmania) and La Trobe in Victoria giving it an unassailable six seat buffer in the lower house.

A swing greater than about 4.3 per cent would see Labor win 20 seats in a landslide. The question really is to figure out if the ALP can get a swing of 4.3 per cent. It is not impossible. The swing against Labor in 2013 was in the order of 4.5 per cent and it would be difficult not to think that Turnbull is at least as unpopular as Rudd was three years ago.

Recent opinion polling indicates that Labor is on track to get the necessary swing and unseat the coalition government. The MSM pundits say Shorten needs 4.5 per cent to gain the Treasury benches, so anything close to this would be pretty good for Labor.

A picture’s worth a lot of words

Having spent a few hours doing the sums I am optimistic that Labor can win on 2 July, but before I chewed on the math and the swingometer I have felt confident for some time.

But it really struck me a couple of weeks ago when images of Malcolm looking irritable, tired, washed out, grim and miserable began to pepper my newsfeeds. Yes, some of these images are when Turnbull has been caught off guard, but they are telling. He looks like a man defeated.

I knew that Turnbull would have a reasonable honeymoon period with the mainstream media and that it would take some months for his shine to wear off. It’s taken a while, but we’ve reached that point. The rusted on Abbottistas in the NewsCoprse bunker re unhappy with Malcolm, but are obliged to grit their teeth and back him, while secretly wishing for an Abbott return (not going to happen). For Fairfax and the ABC it’s taken a while, but their support for the coalition is not a ringing endorsement.

Turnbull is unpopular, he comes across as a toff and out of touch and his cabinet is still dominated by Abbott’s politics. The Turnbull reality is just as ugly as the Abbott reality. It’s the same pig with new lipstick.

The honeymoon is over baby.

We have long passed the point where Turnbull could win in 2016 just by not being Tony Abbott. Beneath the glitter, smiles and plucked eyebrows the Liberal Party is still the party of Howard and Abbott. Turnbull is leader only because just over half of the party room could no longer stomach the horror of a continuing Abbott/Credlin government. Turnbull is not popular among the Libs’ hardcore IPAlite membership and he is being actively undermined by the hard right factions across the nation.

There’s no wonder then that he’s not looking his best, is easily irritated and often seems like he just wants to retire to the Caymans and enjoy his Mossack Fonseca profits.

Thanks for coming, it’s been nearly a year since I wrote anything for this blog.

This entry was posted on Sunday, May 29th, 2016 at 12:35 pm and is filed under australian politics, elections, Politics (capital P). You can follow any responses to this entry through the RSS 2.0 feed. You can leave a response, or trackback from your own site.

One Response to Can Labor win? It ain’t gonna be easy, but it ain’t impossible either